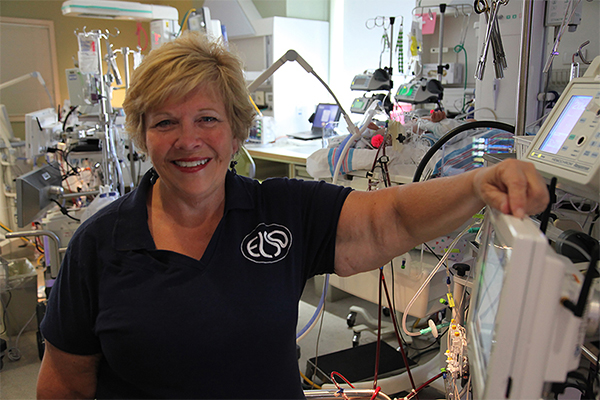 No one really knows what ECMO is until it’s needed, and even then it can be very overwhelming.

In 1985, the Children’s Hospital of Georgia became the first hospital in the Southeast to provide this life-saving procedure, and we’ve cared for 540 patients since then. While ECMO is only used in some of the most critical situations, when it is needed, we are ready, giving hope to patients and families.

Babies placed on an ECMO machine at Children’s Hospital of Georgia have a greater chance of survival at the state’s second largest children’s hospital than they would at many other facilities nationwide, according to the latest data.

ECMO or extracorporeal membrane oxygenation is a treatment used when your child’s heart and/or lungs are not doing their jobs.  ECMO patients usually have severe respiratory failure that has occurred due to some other medical condition like asthma, flu or overwhelming sepsis. Patients who receive ECMO are often so sick that they could die. While ECMO is not a cure or a treatment for the underlying problem, it does allow your child’s lungs and heart time to rest and heal.

When a patient undergoes ECMO support, a cannula, which is like a large IV, is inserted into the neck vessels and threaded to the heart.  Blood is continuously pumped out of the body by a pump (supporting the heart) to an oxygenator (supporting the lungs), and then returned to the patient. When the blood goes through the oxygenator, carbon dioxide is removed and oxygen is added, performing the work that the patient’s own lungs should be doing but can’t.

The lungs are allowed to collapse and rest so they can heal.  At first the child receives most life support via the ECMO machine, but as the lungs improve, ECMO support is gradually decreased until your baby or child is functioning and breathing independently. This can take a few days or even weeks.

The waiting can be very overwhelming for parents, as there will be many days when your child is receiving maximum support with little change or improvement.  Most parents even question whether they are doing the right thing. Don’t be afraid to express these concerns and ask questions. We are here not only for your child, but for you, the family.

Your child will have a dedicated ECMO Specialist at the bedside 24 hours a day to monitor the equipment and your child’s condition in order to make any needed adjustments to promote recovery. Plus, you have the benefit of three decades of ECMO experience being put toward the care of your child.

We can also connect you to other support services, including Pastoral Care and Counseling; and if you live far away, a “home away from home” at the Ronald McDonald House.

We hope your baby or child won’t need ECMO. However, just know that your young one is in the excellent hands of an award-winning ECMO team at Children’s Hospital of Georgia.