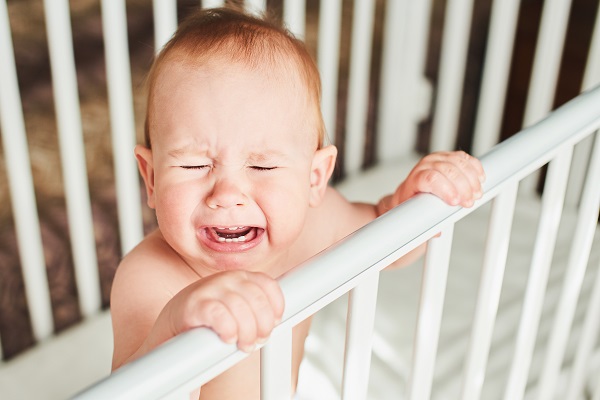 Oh, yes, I was that mom. Starting when my daughter, Addy, was in the hospital, I was determined that she would have every need met, would never feel that I wasn’t there to comfort and console her. This thinking was supported by blogs of other moms who felt the same way, that crying (especially crying it out) would cause far too much stress to the baby and—cue the drama—teach her that her world was oh so cold and cruel.

One blogger wrote how her baby only had to utter, “Eh,” and she was immediately by his side—and how proud she was that he never once felt alone or abandoned.

I can only attribute how besotted I was with this idea to the fact that I’m a first-time and older mom to a baby who is likely to be an only child. Honestly, it just seemed another way that I could ensure that this baby experience would be the best, once-in-a-lifetime experience that I would ever have. And crying it out, a method that some experts say can help babies six months or older learn to fall asleep on their own, wasn’t a part of that.

This was despite the fact that so many mom friends, my sister and even my pediatrician said that once it was time, cry it out worked—like, really worked—and that their kids were fine, happy, well-adjusted children who still loved their mamas.

(I was also that mom who at 8 months pregnant told my co-workers that I thought I’d probably be bored those first few weeks and planned to read a lot of books, even do a bit of work if I felt like it. They laughed at me then too.)

I coasted along on new-mom euphoria for about four months. Addy was starting to sleep well at night, waking only once or twice. I was triumphant.

But then came the turn.
Addy has always loved to nurse, often and long, sometimes for as much as eight hours total—a work day!—in a single day. The first few times she woke up about two hours after I’d fed her and put her to bed, I chalked it up to teething and settled her down with a sip of mama’s milk. Then the waking became more persistent—the familiar wail happening every couple of hours. Nursing would soothe her for the hour or so she was at my breast, but she wouldn’t be put down.

She’d happily snuggle her head on my shoulder or my husband’s shoulder, but screamed if she even felt our bodies begin to contract toward laying her down.

We were literally the walking dead. I’ve never valued sleep so much as I have these past months when I’ve only gotten three to four hours (or less!) a night—when I’ve always been my best on eight or more hours.

We got as far as talking about cry it out with our pediatrician at month five and at month six, but still I resisted. We tried the more gentle method of picking her up every time she cried, soothing her, then putting her back down; one expert said you might have to do it a hundred times the first night (we didn’t last that long…Addy was back up on our shoulders after about five times). I fed her baby cereal at dinner and also tried to make sure she drank as much as possible before bed to ensure she had a full belly to help her sleep.

We tried to tire her out, we tried good sleep hygiene and a firm routine with quiet time an hour before bed, we tried keeping her awake during the day. One night, we half-heartedly tried cry it out, but after 45 minutes gave in to her piercing screams that were increasing in pitch.

At any given hour of the night, one of us would be soothing a baby, while the other desperately tried to fall back asleep for a few precious minutes. And none of us were sleeping well, except for Addy.

I was stubborn, oh yes, I was stubborn. I thought I was resigned to the fact that this was how it would be until she grew out of it. But I could see her struggling, so tired, but unable to fall asleep on her own, unless she was up on one of our shoulders.

Early on, one of my friends had told me that I would know when I was ready for cry it out. And I did. It was about 3 a.m. on a random weeknight when she was about 9 months old. I finally told myself, “Enough,” and did the best thing I could for my daughter. I put her down in her crib, said, “Nighty-night, I love you,” and walked away.

She cried and cried, so much that my husband had to walk away downstairs. I checked on her on the set times of 5, then 10, then 15 minutes, and between-times, I waited it out on our bed, hugging my knees to my chest and blinking away tears.

Mercifully, Addy was as ready as we were. That night, she cried for only a half-hour before blessfully falling asleep. The next night it took only 15 minutes. And that was it. And then we all slept.

We’ve still had a few ups and downs, but she’s learning. Now she usually cries for a minute or two when she goes to bed at 7:30/8 p.m., but is sleeping (knock on wood!) through to 5 a.m. or later these days. And that’s also translated into better daytime sleeping (hooray for two-hour naps!).

And I’ve learned that I’m not a mean mommy for letting my baby cry it out and self-soothe. I’m still right there waiting in case she needs me, but she’s a happier and healthier baby overall—for just a little bit of crying.