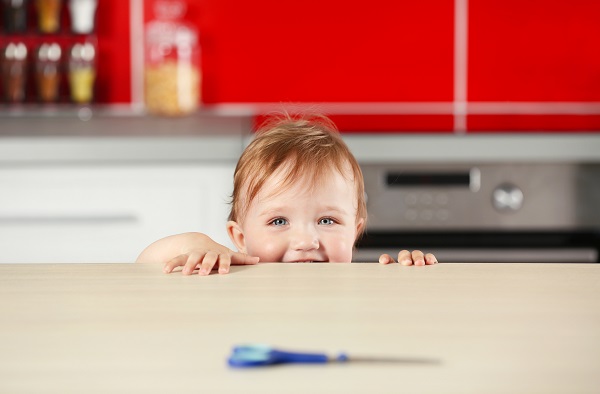 As parents, we worry—a lot.

We worry about whether our kids will make friends. If they’ll be smart and successful. How polite and responsible and caring they are.

We also worry about safety. We worry about car accidents and all the scary things that can happen out there in a big world. But one thing we don’t worry as much about? Our own homes.

In fact, about 77 percent of parents report that they feel their home is safer than most. That’s according to a Safe Kids Worldwide survey, “Report to the Nation: Protecting Children in Your Home.” But—here’s the not-so-funny punchline—roughly the same percentage doesn’t complete simple childproofing in certain circumstances.

Are you part of the statistic? Let’s find out.

Do you ever leave your child alone in the bathtub?
Ninety-nine percent of parents surveyed aren’t concerned about drowning at home. “But shockingly, one in eight parents admit they have left their young child alone in the bathtub for five minutes or longer,” said Renee McCabe, Safe Kids coordinator at the Children’s Hospital of Georgia.  Why? Reasons include getting towels, checking on other children or cooking. Drowning happens more often than you might think; every week, a child dies from drowning in a bathtub.

Do you have a fire escape plan?
Most fires do happen during the day, but more than 50 percent of home fire deaths are a result of fires that start between 11 p.m. and 7 a.m. About 46 percent of us don’t have a fire escape plan, but it’s important not only to create one (including two ways to get out of the house in the event of a fire) but to also practice it as a family.

Do you practice safe sleep habits with your baby?
It’s been hammered into new parents: Put babies to sleep in a sleep sack, on their backs and with nothing else in the crib. But for kids under one, suffocation is the main cause of injury-related death. “In a separate study, Safe Kids reported that despite all the education, 73 percent of parents placed items like blankets, bumpers and stuffed animals in the crib with their baby, all of which can be suffocation hazards,” said McCabe.

How safe are your windows?
Most of us likely don’t think about our windows and their associated coverings as being a potential hazard. In fact, while 73 percent of surveyed parents say they’ve heard of window blind cords being a strangulation hazard, only 23 percent have actually made changes such as removing the cords—even though nearly every month, a child dies from strangulation due to window blinds. “In addition, 70 percent of parents don’t use window guards to help stop children from falling out of windows,” said McCabe. “And yes, it happens: About 3,300 children are injured from falling out of a window every year.”

Do you keep medicines and cleaning products locked away and on a high shelf?
More than 90 percent of us aren’t worried about poisoning. But tell that to the Poison Control Centers: They answer more than one million calls every year from concerned parents whose children have gotten into medicine or other potentially dangerous products. According to Safe Kids, 3 of 10 parents with a toddler admit that they keep medicines or cleaning products on a low shelf or in an unlocked cabinet. “We all know locks can malfunction and children can climb,” said McCabe. “The rule of ‘lock away and store high’ provides a double layer of protection. Grandparents and other caregivers also need to be aware of this rule.”

How safe is your TV?
A large flatscreen TV could easily hurt an adult—much less a child—if it were to fall over on one of us. Ditto for large pieces of furniture that could become unbalanced—such as bookcases, dressers and more—especially if a child tried to climb or pull on them. Nearly 50 percent of us don’t anchor these items, but we should to help prevent tipovers.

The Final Tally
The numbers are scary, but they aren’t just a fear tactic. “These kinds of accidents in the home feel worse to us as parents because they are preventable,” said McCabe, whose own 16-year-old son had to have emergency surgery due to a simple fall in a friend’s backyard. “No parent wants to think this can happen to them, but that’s why taking these small, simple steps to keep your home safe is so important.”

Want to check your childproofing skills? Safe Kids offers an interactive video that walks you step by step through spots you may have missed in your home. Watch it here: http://www.thinglink.com/video/823196563353370624.