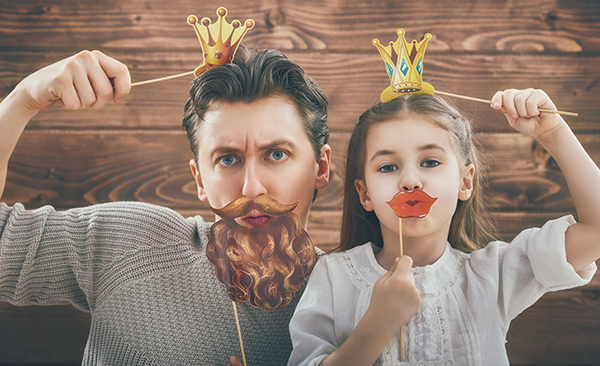 Being a dad to two daughters has worked out pretty well, but the first thought that came to me was, wow, puberty, there’s going to be all this stuff that I won’t know!

But I realized quickly that I could learn. My daughters are 20 and 15 now, so I’ve learned a lot along the way. Here are just a few of the most important lessons, from babyhood on up:

It seems basic, but guys, you need to wipe the right way when changing your daughter’s diapers.
If you don’t know this already, you find out fast. Always wipe your daughter’s bowel movements from front to back to help her avoid urinary tract infections and other nasty infections.

Girls are curious too.
It’s a common thing: Parents of boys will often ask me as a pediatrician about their toddler sons playing with their penises. It’s absolutely nothing to worry about—just about all boys do it. Similarly, parents of girls come to me with the same question, about their daughters playing with their private parts. It’s not talked about as much, but don’t worry: It’s just as normal.

Your daughter is a girl, but she’s not made of glass.
Roughhousing and physical play with their dads is something little girls enjoy and need just as much as little boys do. So swing your girl high in the air, carry her on your shoulders, let her play “hop on Pop”: She’ll love it, and so will you.

But about that playtime: The way that girls play games is different.
Think about it, guys: When we play games, we like to keep score, we like having a certain number of players on each team, we like rules, and we like crowning a champion. Not to say that girls don’t too, but girls are more likely to participate in open-ended play, where the rules of the game can change, more or less people can join in, and there’s no wrong idea. If you can let yourself turn off that part of your brain that wants to keep score and go with your daughter’s flow, you can end up making up some really silly games, but you’ll also share some wonderful memories.

It’s not just boys who need to learn how to use a hammer and drill.
There’s no reason why your daughter can’t or shouldn’t tag along with you while you’re working in the garage or doing other “guy stuff.” Showing her the right way to use a hammer, screwdriver and other tools are all useful skills that she’ll need down the road—so why not learn from the best?

This may sound weird, but don’t always tell your daughter how smart she is.
It’s an interesting phenomenon: Girls routinely outperform boys in school early on, but in middle and high school, they drop back. What so frequently happens in the early grades is that because girls do very well, we of course say, “Great job, Susie, you’re so smart.” For the boys who are struggling a bit, we say, “Keep trying, you can do it.” So boys learn to tough it out, and work harder.

Once children reach middle school where the schoolwork is tougher, girls who have always been told how smart they are may think that because they’re not getting the answers right immediately, they’re not capable. So while praising good grades is wonderful, make sure to balance that by applauding hard work, perseverance and grit.

The beauty thing: Watch what you say, guys.
“Oh, you’re the most beautiful baby in the world!” I don’t know a single parent who hasn’t said that to their daughter, not just once, but probably multiple times. A little bit of that is normal and totally expected. But only telling your daughter that she’s beautiful? It’s important to teach your daughter that appearances are fine (grooming is a good thing, after all), but the deeper stuff—like being smart, strong and confident—is even more important. As dads, we should praise those qualities in our girls. At the same time, we should watch our own tendency as males to be highly visual and not objectify women we see as beautiful or ugly. Remember, your daughter is watching your every move. So, guys, just think before you speak.

When it comes to boys, don’t be that dad.
You know the old cliché about the dad cleaning his shotgun before the boys come calling? That old chestnut is hardly even funny anymore, but dads do have a tendency to bristle up when their daughters start to be interested in boys. But being intimidating, “standing guard” or immediately seeing the worst in a guy she brings home is one of the worst things you can do for your daughter. What you run the risk of is essentially telling your daughter through your actions that you don’t respect her judgment and that she isn’t capable of deciding whom she should be spending her time with. Instead, talk to your daughter about what she likes about this boy. You may be surprised to find out that she sees some of the same things in him that she sees in you.

Finally—and this may be the most important of all—remember that your daughter is watching how you treat your wife and every other woman in your life.
We all want our children to have good self-esteem and grow up to be strong and confident. So be careful of devaluing what women say (that includes your wife and daughter) or talking down to them (for example, saying “That’s so cute,” when a woman, including your daughter, expresses an opinion). You don’t need to worry about your daughter’s self-esteem if you treat everyone with the respect they deserve as human beings. As a dad, remember: You are your daughter’s first example of how a man should treat a woman. Make it a good one.

When you choose CHOG for your child’s care, an entire team of experts are focused on the health and well-being of your child for optimum growth and development. The Children’s Hospital of Georgia has the largest team of general pediatricians, adolescent medicine physicians and pediatric specialists in the Augusta area. For more information about CHOG, please visit our website at augustahealth.org/chog or call 706-721-KIDS (5437).