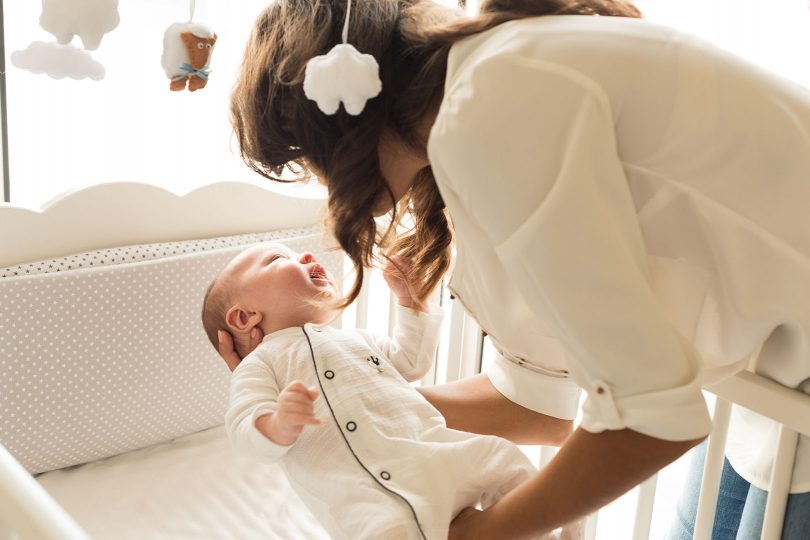 No one believes it until they become a parent, but those first few months of caring for a newborn are often the most exhausting time of your life.

Amid the coos and the smiles and all the sweet snuggling, there’s the harsh reality of constant wakings to feed—and a drastic shortage of sleep for parents.

So it’s no wonder that a high percentage of parents admit that they have taken their baby to bed with them, just to get a few more precious minutes of sleep.

In 2016, the American Academy of Pediatrics acknowledged that parents frequently fall asleep while feeding an infant—a subtle change to help open up the conversation about cosleeping.

Because while sharing a bed with your baby may be a reality, it’s also a reality that cosleeping increases the risk of sudden infant death syndrome or SIDS by 40 percent.

“We recognize that those first several months are tough, sleepwise,” said Renee McCabe, Injury Prevention & Safe Kids Program Manager at the Children’s Hospital of Georgia at Augusta University. ”I know that firsthand as a parent, too. But we can’t get away from the fact that since the American Academy of Pediatrics first came out with safe sleep measures, including recommendations against cosleeping, there’s been a huge decrease in SIDS in the United States.”

According to the most recent statistics, gathered in 2010, more than 2,000 babies died of SIDS that year, and all babies are at risk until they’re a year old, although risk is highest for those younger than 6 months.

Most parents never think SIDS will happen to them. That was the case for Cincinnati-based pediatric cardiologist Sam Hanke and his wife, Maura, who launched the Charlie’s Kids Foundation to educate parents about safe sleep after the death of their son from SIDS.

”The night we lost Charlie was not unlike any of the newborn nights before it,” Hanke said during an AAP annual meeting in 2016. ”But, my wife had reached a point of exhaustion, and I offered to hold a fussy Charlie to give her some much-needed rest. I sat on the couch with Charlie watching TV and unexpectedly fell asleep. When I woke up, Charlie was gone.”

What the AAP does advise is for babies to sleep in their own bed in their parents’ room for the first six months, preferably up to a year.

“This allows parents to feed children in the middle of the night, then place them back in their own crib, portable crib, play yard or raised bassinet, which can be pushed right against the parents’ bed but is still its own sleep space,” McCabe said.

And if parents do happen to doze off while feeding the baby, the AAP guidelines say that it is less hazardous to fall asleep in bed than on a sofa or armchair. However, a high percentage of SIDS deaths are caused by bedding, so it’s important that no pillows, sheets or blankets that could obstruct infant breathing are on the bed. In other words, be prepared to throw the covers all the way back and remove pillows before you feed your infant in your bed.

“Still, your baby is safest alone, on his or her back, in their own bed—without pillows, crib bumpers and stuffed animals,” McCabe said.

The complete AAP recommendations are available at http://pediatrics.aappublications.org/content/early/2016/10/20/peds.2016-2938. But here are answers to a few more specific questions parents might have:

What about marketed cosleepers, which are either placed on the bed or attached to the side of the bed?

According to the AAP, there isn’t enough evidence to recommend for or against these devices. Until there is, it’s better to err on the side of caution and place your baby alone in his or her own bed, without any pillows, blankets or stuffed animals, separate from your bed.

When can I add stuffed animals, pillows or blankets to the crib?

Once babies are a year or older, they have enough head control and movement so that toys can safely be introduced into the crib. But there’s still no need for blankets or pillows until children move into a big boy or big girl bed. Use a sleep sack instead, or your child might be completely comfortable in just a onesie in the summer or a footed pajama in winter, with or without a sleep sack. Consider what you are wearing and how comfortable you are in your home, and dress your baby accordingly.

I’ve seen inclined sleepers on the market. Are these safe?

While these devices may be marketed as good for sleep, the AAP recommends that babies are always placed on a firm, flat surface for sleeping. The semi-reclined position actually places your baby at risk since it’s easy for the chin to drop to the chest and compress the airway—if these are used for overnight sleeping or napping. These kinds of sleepers have also been shown to increase the risk of flat head syndrome in infants since babies are ”cuddled” in them and aren’t able to move their heads. A flat surface on the other hand, allows babies to find different head positions and reduces that risk.

Should I invest in a special monitor to track my baby’s heart rate and oxygen levels?

If it makes you feel better, then yes. But just know that these are not always reliable, since babies move and squirm and potentially could kick off these devices.

What’s the deal with crib bumpers?

Bumpers continue to be widely displayed in baby stores, but shouldn’t be used for children under a year old.

”Even for older toddlers, with their ties and a child’s inclination to chew, there’s still a risk of strangulation,” McCabe said. ”While they look pretty, there’s really no reason to use a crib bumper, and it’s a safer sleep environment without them.”

Safe Kids Greater Augusta at Children’s Hospital of Georgia offers free safe sleep classes monthly. Register at augustahealth.org/safekids or give them a call at 706-721-7606.