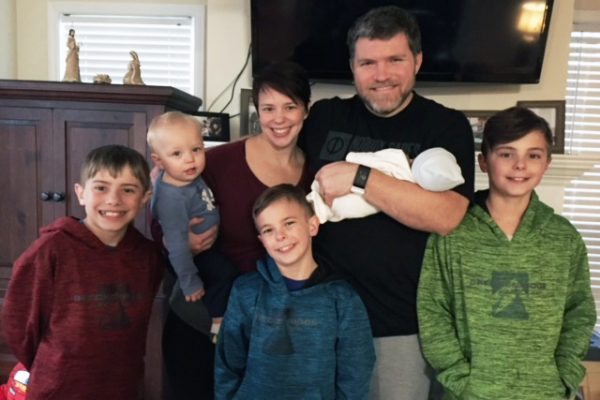 The #MeToo movement has parents wondering, “are we raising good men?”

Terry Morrow, nuclear medicine technician at Augusta University Health, and his wife Rebecca have five boys—Gavin (12), Solomon (11), Ethan (9), Obadian (14 months) and Levi (9 weeks)—which I’m sure just made jaws drop. Or if a southerner, a “bless your heart!” may have been uttered.

The Morrows sat down and highlighted how they strive to raise good men in today’s society.

Teaching boys right from wrong
While much of today’s youth learn from school, church and the community, the Morrows want to be their sons’ first source of information. “We try to be the first ones to tell our kids things,” said Rebecca.

“We’re very proactive and not reactive,” said Terry. “We would much rather hit it off before it even becomes an issue.”  In order to do this, “we set pretty big ground rules before they even know what they are or what they mean,” said Rebecca.

They like to lead by example and believe that a large part of leading by example starts by surrounding themselves with other parents who they believe are good parents. When around adults who have a different perspective, or whose kids are in a different environment, it allows both sets of parents to bounce situations off of one another, which can help in raising their children. “You can’t think that our kids are just perfect in any situation,” said Rebecca. “They’re still being molded and they still have a long way to go.”

“We base a lot of the path we take on our faith,” Terry said. “Our faith is huge. And that gives us a moral compass.”

As many parents’ experience, their kids have friendships they believe may not be the healthiest relationships and use these opportunities to teach. The Morrows ask their kids, “is he (friend) acting that way because that’s the way he’s treated at home?” said Rebecca. “We can teach our kids to not think in the perspective of ‘you only have this one small story,’ instead, what’s the whole picture? How were their parents raised? What happened to their parents? Why do they treat their children this way? And if that’s how their parents treat them, then that’s how they’ll treat their friends. They don’t know anything else.” They teach their kids that even though someone treated you a certain way doesn’t mean it’s acceptable to treat them the same. “You need to treat them the way you would want to be treated.”

While someone may come from an unfortunate circumstance or display alternate values, the Morrows explain that they still need your love and respect. “It’s a constant, this kid’s pulling you down to his level, you’ve got to pull him up to yours,” said Rebecca. She said the most difficult thing as a parent is recognizing, “are we parenting our kids to this other child’s level or are we parenting to our level?”

“Right now, the way society is, everybody is really instant gratification, and social media savvy that it takes away from real life,” said Terry. While many young kids have their own devices and social media accounts, the Morrow boys don’t have any social media access and have limited screen time with electronics. They are encouraged to spend time outside. “We can tell a huge difference when they go outside and play, just in their attitudes.”

Being good men
Still, if an issue arises or someone hurts their feelings, “we never say ‘man up,’” said Terry. “We always say, ‘you have to toughen up.’” If they have an emotional response to a situation, they encourage their boys to take a step back, have the response and move forward. If someone hurts their feelings Rebecca reminds her boys “that person doesn’t rule you. That person doesn’t get to control you. You can decide how that’s going to affect you.”

“We also tell them that if they are honest with us, then we’ll stand up for them,” said Terry.  “And if they see us standing up for them, they’re much more willing to stand up for other people,” which is largely based on their faith. They continue to try to lead by example. “Because they see us living our faith,” it’s what they want their children to do, as well.

“We want to show love to everyone no matter what,” said Terry. “And loving is also respecting each other.”

“We want to foster our boys to be adventurous, a little bit wild, but good boys,” said Terry. “We want them to be good men.”

The boys answered: What does it mean to be a good man?

When you choose Children’s Hospital of Georgia for your child’s care, an entire team of experts are focused on the health and well-being of your child for optimum growth and development. The Children’s Hospital of Georgia has the largest team of general pediatricians, adolescent medicine physicians and pediatric specialists in the Augusta area. For more information about CHOG, please visit our website at augustahealth.org/chog or call 706-721-KIDS (5437).

Did you know? The Children’s Hospital of Georgia