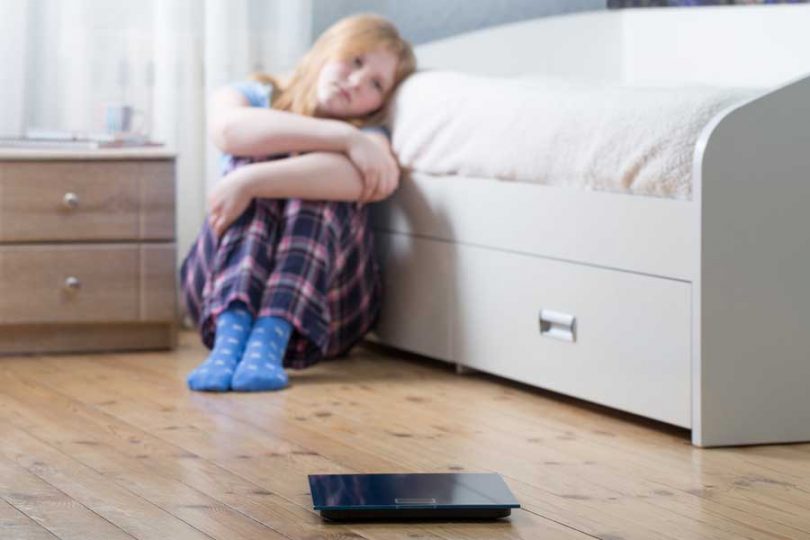 For Sherry*, it started with wanting to get a little leaner so that she’d be a little quicker on the basketball court. She started watching her calories, but on the weekends, sometimes she’d devour an entire box of Oreos—then hate herself. So she’d work out even harder and cut back even more to make up for it. Soon, her diet was mostly oatmeal with skim milk. She came home one day sobbing, “My coach told me to just go eat a hamburger, but I can’t do that!”

Today’s media tends to put its focus on obesity. But although the cases are not as frequently reported as they were a decade or so ago, about 15 percent of young adults will suffer from some type of eating disorder before the age of 20. This includes guys too, who are often diagnosed much later because most people assume that males aren’t at risk for anorexia, bulimia or other eating disorders.

What’s also new is that eating disorders are happening now in kids as young as age 9 or 10, said Dr. Christian Lemmon, a child and adolescent psychologist at the Children’s Hospital of Georgia who specializes in eating disorders.

“The age of onset for eating disorders has decreased dramatically,” said Lemmon. “I’ve seen more patients between the ages of 9 and 13 in the past five years than I had in the previous 25.”

Part of the reason why is that kids today are going into puberty earlier. In the past, 13 was the average age for puberty. Now, it can be as young as nine.

Eating disorders have always been linked to puberty because that’s when children’s bodies start to change—and they notice, said Lemmon. “For the first time in their life, they start thinking far more about body image,” he said.

Girls begin getting curves and added body fat, while boys get broader and may start growing facial hair. Both are suddenly unsure of what these changes mean and if they’re even normal. “The best thing parents can do is educate their daughters and sons about how their bodies change once they go through puberty, set realistic expectations, help them understand what’s healthy, and teach them to embrace the changes instead of being scared by them,” said Lemmon.

When the signs aren’t so obvious

Many of us worry about being overweight. But when a kid starts to restrict calories, talks about wanting to “eat clean” and exercises far more than necessary, it may seem like he or she is making healthy choices—but those could be warning signs of an eating disorder.

Most of us are familiar with anorexia, which involves refusing to eat, or bulimia, with its cycle of binging and purging. Orthorexia is a newer disorder where the person becomes overly obsessed with eating only foods that are healthy—and restricts themselves more and more over time.

“It’s important to understand that it’s not about vanity,” said Lemmon. “Eating disorders can result when a child is struggling with having a sense of control over their lives and unsure or unable to express emotions in a healthy way.”

Pro-eating disorder websites make these issues worse by marketing “thinspiration” and praising starvation, binging and purging as a “positive” lifestyle.

So as a start, keep communication open with your child, and know the sites on the internet he or she visits. Listen for lots of talk about their own or others’ weight, shape or size; about avoiding certain foods; or about feeling bad for eating certain foods. Is your child avoiding activities that involve food? Is your child covering up his or her body—for example, refusing to go swimming because he or she doesn’t want to be seen in a swimsuit?

Does your child come home after sports practice, then exercises for another hour? Notice too if your child is skipping meals, avoiding eating with the family, eating only a very restricted diet—or on the opposite end of the spectrum, are you finding whole boxes of cereal gone in a day or food wrappers hidden in your child’s bedroom?

“Then there’s the emotional part: Is your child having a hard time regulating their emotions? Is he or she a perfectionist or having trouble handling stress?” said Lemmon. “If you see these signs, it’s time to have a conversation along the lines of, ‘I’ve noticed you’ve become more restrictive with your diet. What’s going on?’ Depending on the results of that conversation, you may need to get your child help right away.”

Additionally, Lemmon added, “One thing we know for sure is that the sooner these kids can get into treatment, the better their chances of recovery will be—by far.”

When you live in a world that’s divided between fat and thin, how do you raise a child with a healthy attitude toward eating and his or her own body?

Start by eliminating those two words—fat and thin—from your vocabulary. “The focus shouldn’t be on appearance and thinness,” said Lemmon. “It should be about being healthy and strong and physically active.” Parents too should model these healthy behaviors.

Talk with and listen to your kids, while encouraging their self-confidence, healthy expression of emotions and healthy stress management. “Kids who can’t express emotions or who have done it and were punished or invalidated will be far more at risk,” said Lemmon.

Be there for them, while still teaching them how to be independent. “Kids can tend to be perfectionists too, so help them have realistic expectations,” he said.

Finally, as children enter puberty, have the talk so they understand the changes their bodies are going through—and that it’s not weird or shameful to suddenly be curvier or to have hair in new places.

“Open and honest family communication—from the beginning—is probably one of the most important things a parent can do to help raise a happy and healthy child,” said Lemmon.

Need help with your child’s eating habits?
Children’s Hospital of Georgia is the only hospital in the area completely dedicated to the care and well-being of children. We ensure that your child gets the attention he or she deserves in order to receive a proper diagnosis. For more information or to make an appointment, visit augustahealth.org/chog or call 706-721-KIDS (5437).