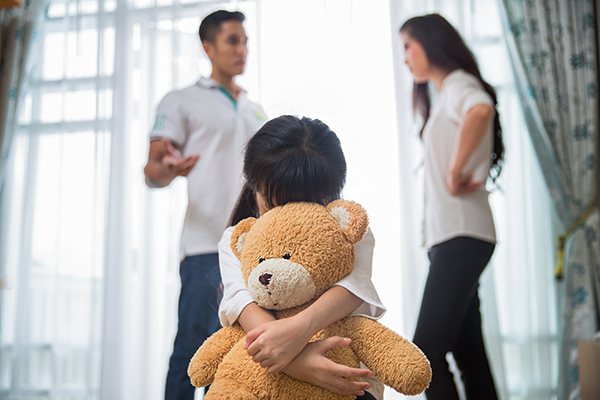 When you can’t get along with your boyfriend or girlfriend, breaking up can be easy.

When you’re married, it’s a little messier, but it can still be simple to walk away and start fresh.

When kids are involved? That’s when it can get really complicated.

Very few of us leave a marriage without a struggle, especially when there are children. Most of us—hopefully—go through counseling and other strategies to help get our marriage back to where it makes both partners happy.

But if these strategies don’t work or there are deeper reasons why the marriage should end? Once you’ve made that decision, turn your focus on helping your children.

“As a whole, the impact of divorce on children is consistently negative,” said Dr. Alex Mabe, a child psychologist at the Children’s Hospital of Georgia. “Adults don’t fare well either, but children of divorce, on average, tend not to be as accomplished educationally, have more emotional and behavioral problems, have more difficulty relating to others socially and may have weaker emotional ties with parents.”

While that sounds pretty bleak, remember that those statistics are based on averages. “And the effects are moderate, not huge,” said Mabe. “Still, if you can reduce marital conflict and stay together, it is better for children. However, if you can’t, it’s better to separate to reduce that conflict. Then, with the right support system and the right attention, outcomes are much better for those kids.”

When there are so many emotions at stake, of course divorce comes with its share of drama. Do your utmost to rein it in around the kids.

If you and your partner have decided to divorce, the ideal situation would be for you both to sit down and have a calm conversation with your children to explain—in a way they will understand depending on their ages—that mom and dad won’t be living together anymore. “Children need to have predictability,” said Mabe. “So as stressful as it is to hear the news, it’s better for them to know sooner rather than later. For example, you don’t want it to happen that a child wakes up and their other parent is no longer there”—although if marital abuse or other violence is involved, those of course are important exceptions.

Then, make sure—over and over again—that kids know that the divorce is not their fault. Think about it—they’ve heard the arguing, whether it’s about money or time spent away or child care decisions. If they’ve heard their names or anything related to their activities, then it’s logical they could conclude the divorce is somehow their fault. Provide clear reassurance that it’s not.

Keep the drama down once the separation happens too. It’s so easy to complain about the other partner or to ask kids to report back on what the other parent is doing. Don’t make your child pick sides or spy. And although the divorce is stressful for you, don’t expect your child to be your support system. “It’s very important for parents not to put kids in the middle as much as possible,” said Mabe.

Divorce at Any Age

As you might expect, divorce is easier or more difficult for kids depending on how old they are when it happens. For young children, as long as they continue to have reasonable contact with both parents with little to no drama, they typically do fairly well, said Mabe.

Elementary school-age children struggle a bit more. This is the age where children tend to think that divorce is somehow their fault, even if they don’t say that out loud. So it’s important for parents to try to be cued in to what’s going on in their heads, and not just how well they might appear on the outside. “Don’t overdo it by checking in. Just keep an eye out for signs they’re struggling,” said Mabe. “This might include changes in how well they’re doing at school, their mood, their sleep, how they’re eating or any major personality changes.”

For teenagers who definitely understand what’s happening, the drama of divorce can leak into their own intimate relationships as they begin dating and have insecurities due to what they’ve seen in their own families. Also, when children turn 14, courts in most states will give serious consideration as to whose home children prefer to live in. Parents should do their best to help children navigate both of these stressful situations, without taking any decisions personally.

Keep Everything Else Status Quo

Everything—from parental relationships to homes and schedules—changes during divorce. So do what you can to keep as much as possible the same, especially for older children.

Going to the same school as before, being able to play with friends on the same schedule, having the same weekend activities—all of these are important to help a child feel grounded when they’re experiencing a major change.

Expect children to be sad or angry off and on—maybe for a long time. But if your child is consistently struggling for a solid two weeks or more—grades are off, they’re not eating or sleeping, or their mood is dark—it might be time to see if talking to a professional might help. And it would be a good idea for both parents too.

Because while divorce is for you, it’s still all about the kids. “Some parents are very amicable during divorce. They’re able to work things out, they have a support system in place that helps maintain the lifestyle children are accustomed to,” said Mabe. “Ideally, this is how every divorce should be.”

The Children’s Hospital of Georgia has one of the area’s largest child and adolescent psychiatry and psychology programs, with specialists who can help your child with the anxiety and depression that can accompany the loss of a loved one. For an appointment, call 706-721-9331.