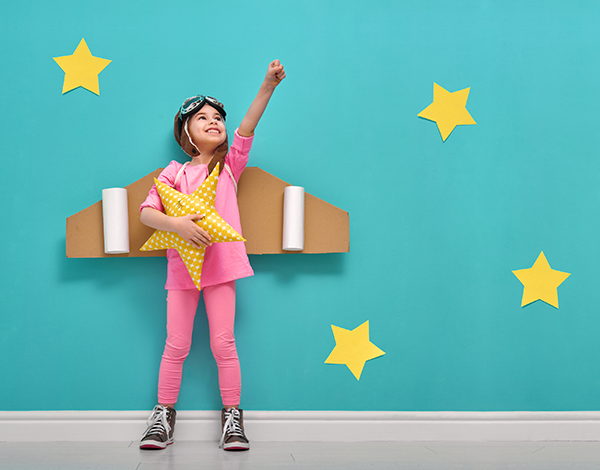 What will the new year bring? A vacation to a fun new destination? A better job or a raise? Getting fitter and healthier? Or maybe being able to spend more time together as a family?

When kids see their parents getting excited about the new year and making resolutions, it’s only natural they may want to set some goals of their own too. And that’s something parents should encourage, says Dr. Christopher Drescher, a pediatric psychologist with the Children’s Hospital of Georgia.

“Making new year’s resolutions can benefit both adults and children,” he said. “It does have positive mood benefits to work toward a goal—even if the work itself isn’t super fun! But there’s a such a great sense of accomplishment when you’re working toward a meaningful, long-term goal.”

Even young children can make a new year’s resolution. Just keep in mind that the definition of a “long-term” goal changes from age to age.

“For a preschool or elementary-age child, a long-term goal might only be for a day or a couple of days,” said Drescher. “But older children can start to set goals to reach in a week or a month or longer, as they grow older.”

How to make resolutions fun—and achievable

The practice of making—and keeping—resolutions is a great tool that can teach your children the value of setting goals and how to reach them, which is something they need in life, said Drescher. But with kids, don’t make it too serious

“Resolutions for kids shouldn’t be dictated by parents,” said Drescher. “We may want our child to keep his or her room neater, but that would be more of a responsibility, rather than a resolution. For goal-setting, it’s important to open up a discussion with children about what’s important to them and what they would like to achieve.”

Once your child has decided on a goal, it can be challenging, but make sure it’s both specific and achievable. “For example, just saying, ‘I want to be healthier,’ isn’t a useful goal,” said Drescher. “It’s difficult to go back and measure progress toward something that’s so general. But saying that you want to exercise three times a week is distinct and measurable.”

Making goals time-bound can also be helpful. “Your child may decide that they want to complete a certain art project as a resolution. It can be helpful to add a goal of completing it by the end of the month, for example.”

Big goals like wanting to make a sports team or being able to sing a solo can “feel like a giant mountain,” said Drescher, “but you can help your child figure out what are the first steps. They can be really small, but completing those small steps to work toward a larger goal are really important.” Those steps can even be placed on a chart and marked off as they are completed, which helps boost kids’ excitement. It also establishes realistic goal-setting, which sets children up for success.

Other kid-appropriate resolutions could include everything from saving money to buy something special or reading a certain number of books to learning to play an instrument or even being more social and saying hi to someone every day. “The possibilities are sort of endless,” said Drescher. “It really depends on the kid.”

In the New Year, kids can resolve to:

So—the statistic goes that about 80 percent of adults will have failed at their new year’s resolutions by February.

Since parents are the model for so much of a child’s behavior, just consider it a teachable moment if you yourself don’t meet your new year’s resolution: Even if you stumble toward reaching a goal, you can always recommit or start over—or if life just gets in the way, it may be a resolution that needs to be reviewed again in 2019. “That shows determination and resilience, but also flexibility in the face of challenges, which is a good thing to show children,” said Drescher. “After all, it’s not realistic to say that every time you set a goal, you will easily reach it. That’s not life.”

At the same time, have that same balance if children stumble toward achieving their resolutions. “There shouldn’t be any shaming, even in jest, saying that children messed up or didn’t do what they said they’d do,” said Drescher.

Instead, take a problem-solving approach. Examine what got in the way, and help children figure out what they might do to overcome the issues.

Or maybe this resolution just wasn’t as important to your child as he or she thought it would be. “It’s OK to step back, be flexible and reassess.”

After all, the whole point of making resolutions is so we can feel better and be happier, right? The same goes for kids. “Again, focus on making the process positive. So even if the resolutions don’t work out, we can get up and get moving again. We may fall down, but we’re not down for good.”

Pediatricians are trained to talk to children about healthy—and not-so-healthy—behavior, and ours are here to help. The Children’s Hospital of Georgia has the largest team of general pediatricians, adolescent medicine physicians and pediatric specialists in the Augusta area. For more information about our services and specialists, visit augustahealth.org/kids or call 706-721-KIDS (5437).

March is Child Life Month! The hospital can be sca

TONIGHT! Eat for a cause at @yourpiepizza and give

"From diagnosis to recovery, we could not be more

We are so thankful for the miracles that happen ev

Charlotte is a true miracle! After birth, she was

Join Nugget and Casey in wishing all of our kids a

Philip is the definition of a miracle. He was born