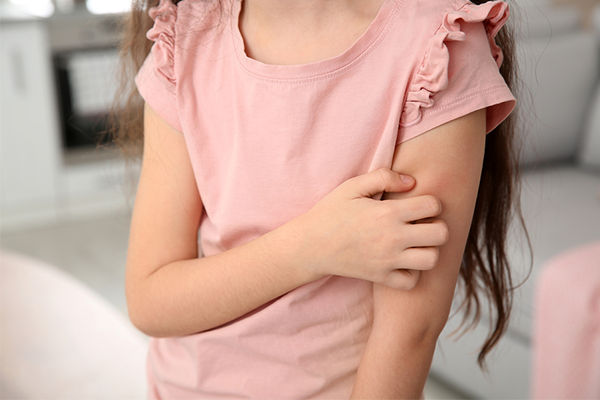 When Dr. Kelly Watson adopted a kitten, Spooky, a few years ago, she thought she saw a funny bald patch on one of Spooky’s littermates. She forgot all about it—until a week later when she and her two children and the kitten all got ringworm.

It’s a fungal infection—not an actual worm—that causes the itchy rash and telltale ring-like mark on the body. While we usually call it ringworm if the rash shows up on our body, if it’s on the feet, it’s athlete’s foot and can cause scaling and cracking skin along with rash. On the groin, it’s jock itch and tends to be more common in men and teens. On the head, it’s tinea capitis and will often cause hair to break off at the shaft, leaving small black dots on the scalp, along with scaling. There’s even a version that shows up on the hand, tinea manus, although that’s usually seen only in adults in certain working environments where the hands are often wet.

But in general, ringworm is quite common, especially in children and teens, so much so that Watson, a general pediatrician at Children’s Hospital of Georgia in Grovetown, usually sees someone with ringworm in her clinic every week or two.

Like many things, ringworm is contagious through contact. But it also flourishes in warm, wet environments. You can get it if you:

It’s not about being dirty, said Watson. The fungus that causes ringworm is everywhere around us. It’s just about being in the wrong place at the wrong time, causing the fungal infection to start.

For most types of ringworm, an over-the-counter antifungal cream is all you’ll need. It should be applied at least twice a day—three times a day is even better—for two to four weeks. “I often tell patients to keep treating that spot for a few days after the rash is gone to make sure there aren’t any spores that could cause the infection to come back,” said Watson.

It takes two days for the cream to stop the rash from being contagious, so cover the rash with a band aid when you’re first treating it. Also apply the cream with a cotton ball or q-tip instead of fingers. “You want to keep the rash from spreading to other people, but also from spreading to other parts of your child’s body,” said Watson, since the person with ringworm who scratches can then transmit it to their head, face or any other place they touch.

For jock itch or athlete’s foot, for more comfort, try drying powders in those locations. Also switch to loose cotton underwear, and change socks frequently if your feet tend to get sweaty.

For ringworm of the scalp, the fungal infection is down inside the hair follicle, which requires an oral antifungal medication for up to six weeks. Medicated shampoos are available to help manage itchiness and any scaling.

Oral antifungals may also be prescribed if someone has a massive spread of ringworm lesions over the body or if he or she has a health condition that makes the immune system weaker, like diabetes or cancer.

Around the house, it’s a smart idea to be a bit of a germaphobe and wash your child’s clothes separately with bleach. If your child has athlete’s foot, scrub out that shower, too. If it’s ringworm on the scalp, wash or replace brushes, combs, hair accessories or hats that may have come into contact with spores.

“Always look for signs of secondary infection too, since kids will scratch,” said Watson. Ringworm is usually only itchy, so if there’s pain, redness, swelling or pus, talk to your child’s doctor.

“And know that the area is going to slowly look better,” she added. “It’s not going to happen overnight; it’s going to take some time.”

If you can imagine six weeks of having to put a cream on your child’s body three times a day, you might agree that preventing ringworm is far easier. So make sure children always wash hands after playing with pets, especially any who are indoor/outdoor animals. Buy cheap flip-flops to wear in the locker room or gym shower. Wear breathable cotton material. And don’t share hats or other headgear.

But also, know that if your child gets ringworm, he or she is in plenty of good company.

“It can happen to the best of us, even doctors,” Watson said with laugh. “Anyone can get ringworm.”