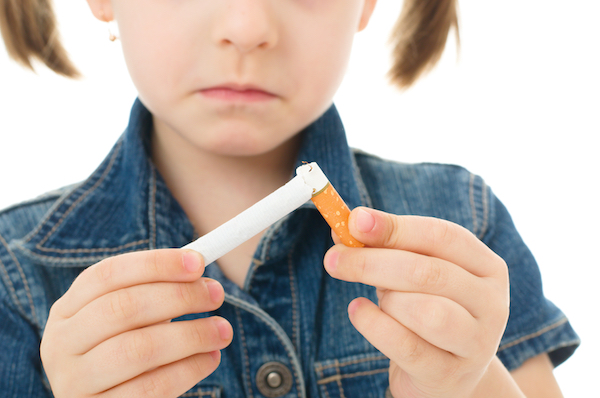 Smoking was just one of those things that made my dad who he was. He smoked constantly, and the smoke encircling him was as much a part of him as his hair, his skin. I remember the haze in our living room—and as a young child, I also remember breathing in the aroma and thinking how good the smoke smelled, just like my dad.

He’d had lung cancer in the ‘70s but still wasn’t able to quit. He would put the smoking on pause sometimes when we were sick—I remember recovering from tonsillitis and how shocking it was to smell the smoke again after a month of breathing only clean air. It no longer smelled good to me, this acrid air that surrounded my father. But we didn’t know enough to ask him to stop, and he seemingly couldn’t.

I didn’t realize the potential impact of this addiction on us, his family.

I took swimming lessons when I was about 9 and hated them. We were practicing bubbles, and “You can take a deeper breath than that,” I remember my coach scolding me. “You’re not trying hard enough. Watch Susie.” My friend inhaled deeply, plunged into the water and a stream of bubbles raced from her nose as she breathed out, seemingly for minutes. I tried again, but I could barely last for 20 seconds. I wonder now, looking back, if it was because of the smoking.

My father died from his second bout of lung cancer when I was 15. I’m thankful and grateful that I have never, ever been tempted to smoke, because growing up in a home of a smoker is one of the strongest risk factors for becoming a smoker. Despite the fact that the U.S. Surgeon General first warned about the dangers and risks of smoking 50 years ago, every day, nearly 4,000 teens in the United States pick up a cigarette and a potentially lifelong addiction. And with roughly 15 percent of the adult population smoking (the numbers are much higher in certain age groups and among lower educational levels), it’s estimated that up to 44 percent of children in the United States are exposed to secondhand smoke regularly.

I don’t know that my father completely understood the potential dangers of secondhand smoke. He knew enough to hold off from smoking when we were recovering from an illness, but not enough to quit. Or maybe it was simply the addiction, because I know that he would have done nearly anything for us if he thought it was to our benefit.

I’m a parent now, and the knowledge we have available today about the impact of secondhand smoke on our children’s developing brains and bodies is startling.

It’s known to increase the incidence of ear infections—and potential surgeries related to those infections. It can worsen colds and other chronic respiratory problems—and even cause children to cough less efficiently. Children are at higher risk for developing pneumonia, and their risk for becoming asthmatic increases by 85 percent! Secondhand smoke ages our children’s arteries, making them stiffer so blood flow isn’t as efficient. It can harm our kidney function and has been linked to childhood leukemia as well as lung, head and neck cancers, even into adulthood.

Children with sickle cell disease have more pain episodes when exposed to secondhand smoke. It’s linked to higher levels of obesity in children. When it comes to performance and behavior, children regularly exposed to secondhand smoke post lower cognitive score and are more likely to have attention deficit hyperactivity disorder or ADHD. It is also associated with poor academic success, increased risk of neurodevelopment delay as well as depression in children and teens.

Today the American Academy of Pediatrics advises pediatricians to start talking to parents and children about smoking prevention and cessation when children are at least 5 years old. It seems so early, but these days, it’s really not.

As children grow into teens, your pediatrician remains your best resource to counsel your child about smoking, its dangers and quitting if they’ve started experimenting with tobacco.

Today, it’s also not just about smoking. Vaping—the use of e-cigarettes—is wildly popular because e-cigs have a perception of safety, along with colorful packaging and fun flavors that appeal to teens. However, both the U.S. Food and Drug Administration and the Centers for Disease Control and Prevention both say not enough research has been done to support any claims of safety—and the products also typically include nicotine, which is the primary cause of the harmful effects on children’s development.

As parents, it’s up to us too to talk to our kids about smoking—and preferably well before they’re tempted by friends, the media or other influences to take that first puff. My daughter’s not even two, and she already understands that litter on the ground outside isn’t good—“not nice,” she says, as she points to a discarded wrapper. So children will take what you teach them to heart.

I still feel sad that my daughter will never know her grandfather—at least in this world. I worry, too, about my own health and the impact of 15 years of secondhand smoke on my body as I grow older. Today, we know more than ever the dangers of smoking and secondhand smoke—knowledge my dad didn’t have. I hope we can all take that knowledge and help our children benefit from it.

The Georgia Cancer Center offers a tobacco cessation program to help tobacco users quit. The program includes a clinic visit, health assessment and a series of cessation classes for support.