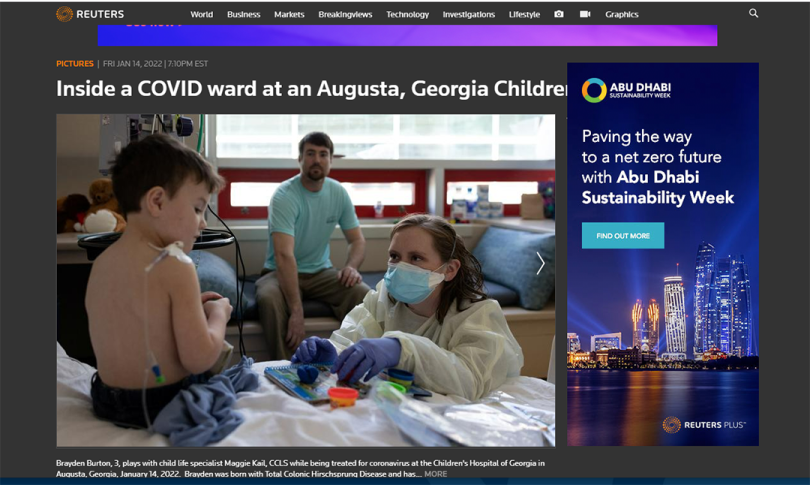 On Jan. 14-15, Hannah Beier from Reuters photographed staff at Children’s Hospital of Georgia as they cared for pediatric patients who were diagnosed with COVID-19. At the time they were published, these photos were among the few in the country that showed the virus’s effect on children from a medical perspective.

Reuter’s photos are available for publications around the world to use in their coverage of the COVID-19 pandemic. Some of the photos also appeared in Mint, a business news organization in India, and Farsnews Agency in Tehran.

In addition to the photos, Beier interviewed Children’s hospitalist Dr. Jacob Eichenberger as well as the parents of three patients. Clips from these interviews were used in more than 70 newscasts across the country by Tuesday, January 18.

Clips from interviews with Eichenberger and Hannah Mills, the mother of a 3-month-old patient, were used in most of the broadcasts. Reuters share the full video in a tweet:

According to Cision, a media monitoring service used by AU Health, the clips were used by the following stations:

Lisa Kaylor is the Lead Communications and Media Coordinator for AU Health. Contact her to schedule an interview on this topic or with one of our experts at 706-721-5292 or lkaylor@augusta.edu.