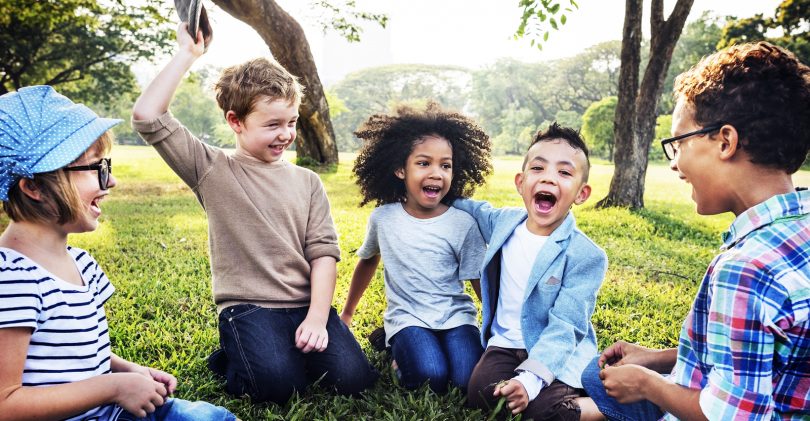 When we talk about wanting our kids to be active, what we’re really talking about is this: How can I get my child away from the TV/video game/smartphone?

That time glued to the screen is one of the biggest obstacles to kids getting up and playing outside, say experts. Studies have found a direct link between screen time and lack of physical activity. Kids who sit in front of a screen for more than two hours a day also have a higher risk of being overweight or obese.

“Just watch your kid’s face,” said Dr. Gregory Kalv, pediatric orthopaedic surgeon at the Children’s Hospital of Georgia. “They’re just so enthralled with it. It’s constant stimulation, but it’s all passive. Then there’s the link between TV use and increased snacking.”

It Doesn’t Happen Overnight
Want your child to be more active? It kind of has to start with you. And it can start earlier than you might think, even when your child is a baby. Here are some suggested minimum guidelines for activity every day, according to the National Association for Sport and Physical Education:

Babyhood: Being active helps with motor development. So, make sure to do that tummy time, bicycle your child’s legs, and encourage him/her to grab toys on a playmat.

Toddler: Aim for at least 30 minutes of planned physical activity, like a walk after dinner or active time on the playground. Then add in at least an hour of free play, which can be broken up into 15 minute or so increments.

Preschool: Plan for a minimum of an hour of planned physical activity, like a dance class or karate class, plus at least another hour of free play, which again can be broken up.

School Age: Like adults, here’s where kids should get at least an hour of physical activity every day.

If you’re thinking that it’s going to be tough to time all this out, think of it this way: Young kids—from toddlerhood to preschool age—shouldn’t be sitting still for longer than one hour unless they’re sleeping. And kids who are in school shouldn’t be inactive for longer than two hours.

Ideally, you’re modeling good physical activity for your child starting at babyhood. But if you’re just starting out on this physical activity thing and trying to get your child off of electronics, it’s OK to be a little sneaky. Start casually suggesting a walk or bike ride after dinner or maybe a special trip to the playground or pool. Go visit a jumping place or other adventure center on the weekend. Most importantly, be active with your kids since they’ll most likely enjoy having an adventure with you.

For more structured activity, experiment and find an activity your child really likes, said Kalv. “With our daughter, we had her pick a sport. First it was soccer, then it was karate, and now she swims and that’s what stuck. It’s OK to experiment and you don’t have to focus on becoming a professional. Just find something they enjoy.”

Just for Girls
Both boys and girls have the same guidelines when it comes to daily activity. But bone loss tends to be more of a problem for women. So bone strengthening exercises—along with plenty of Vitamin D and calcium—are especially important for girls since a lifetime’s worth of bone mass is built all during the childhood and teenage years.

Examples of good bone-building exercises include any game with hopping, skipping and jumping; running; and sports like gymnastics, basketball, volleyball and tennis. Lifting your own body weight (as in pushups or chin-ups) or using weights also builds bone, but note that weightlifting really isn’t recommended until kids are 13 or older.

Pull the Plug?
Most of us watch some TV. Some of us watch a lot of TV. But for kids, even just an hour and a half of watching TV raises the risk of obesity. And screen time at night has been found to affect melatonin levels and quality of sleep.

Experts have also given an obsession with video games a name: internet gaming disorder. “We’re all paying more and more attention to screen time,” said Kalv.

The American Academy of Pediatrics suggests that children from 2 to 5 should have an hour of screen time a day, at most. For older children, it advises consistent limits. And remember that screen time includes time sitting in front of a computer doing homework. “The basic principle is to pay attention to the amount of time being spent on a screen,” said Kalv. “When your child hits your time limit, have him or her take a break and do something else.” Mealtimes should also be a media-free zone.

While basketball hoops, other active games and classes all require a monetary investment, think of it this way: How much are you spending on an iPad, smartphone, game system or other passive entertainment for your child?

It’s a great question to ask yourself, said Kalv. “What we spend on exercise stuff is probably a drop in the bucket compared to what we’re spending on other things. But that exercise and physical activity are far more important.”

The Children’s Hospital of Georgia has the largest team of general pediatricians, adolescent medicine physicians and pediatric specialists in the Augusta area. For more information about Children’s, visit augustahealth.org/kids or call 706-721-KIDS (5437).