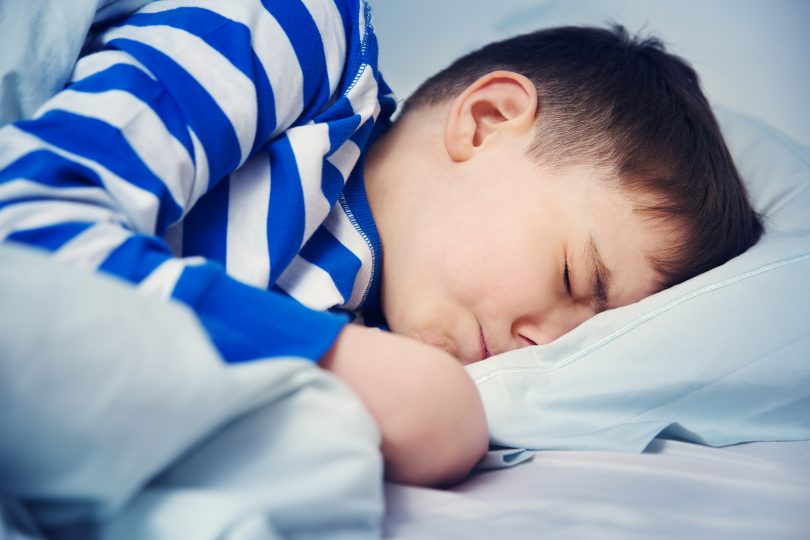 Your child wakes up terrified. Her eyes are open, but she flails and gets more and more upset the longer you try to comfort her. After a few minutes, she calms down, and you’re able to put her down. And the next morning, she’s fine—and doesn’t remember anything when you ask her about it.

Your child may have just had a night terror.

Different from nightmares, night terrors usually occur after children have been asleep for an hour or two—that’s both during naps or at bedtime—when they’re still in deep sleep. The episodes can be as short as a few minutes or as long as a half-hour. Children are not dreaming, which is why they don’t remember anything that happened once they wake up after a nap or the next morning.

Meanwhile, nightmares happen later in the night, during REM (rapid eye movement) sleep, which is when we dream. Children are awake, can be comforted and will usually remember their nightmares or being scared the next day.

Night terrors, at any age

Dr. Katie McKie, pediatric sleep medicine at the Children’s Hospital of Georgia, has experienced night terrors firsthand—not in her kids, but in her husband.

“Night terrors are most common between ages 4 and 12. They can happen in younger kids and even in adults, but most people outgrow them by the time they’re teens,” she said.

In her husband’s case, he had night terrors as a child and has continued to have them off and on throughout adulthood. Although he hasn’t had one in months, McKie can relate to the parent who wakes up, heart pounding, at the sound of their child’s scream.

“Essentially, your child is stuck between being asleep and being awake,” she said. “It’s like sleepwalking, but it just looks scarier. But children have no recall of the event, so it can be more traumatic to the parent than the child.”

Can you prevent night terrors?

Maybe, but maybe not. If anyone in your family has ever had night terrors or sleep walked, your child is more likely to have them.

But, said McKie, night terrors do tend to happen more often if your child’s sleep is disrupted for other reasons. So be sure to focus on good sleep hygiene, including:

You can also add in a nightlight if your child prefers it. “I do use a sound machine too,” said McKie, “ and a lot of kids find that helpful.”

If your child has night terrors almost all the time, try this: Keep a log of when they happen. If the night terrors occur pretty much at the same time every night or naptime, then about 15 or 20 minutes before, gently rouse your child. Don’t wake them up, but give them a gentle jostle or make them turn over. “Think of it as rebooting the brain so it can skip past that glitch in their sleep,” said McKie.

You may need to work on these “scheduled awakenings” for about two to four weeks, then stop and see if the night terrors start again.

In most cases, there’s nothing else you can do when it comes to night terrors. “Even when you try to soothe your child, he or she can become more agitated,” said McKie.

So just make sure your child is safe and won’t be hurt if he or she is flailing around. As hard as it might be to do, “just be near and watch until the episode resolves,” said McKie.

But keep your eye out for any troubling symptoms, which could require a sleep study. If your child’s night terrors also include jerky, rhythmic movements or bedwetting, that could indicate a seizure. Meanwhile, snoring could mean your child has sleep apnea; if that is treated, then it could also successfully stop the night terrors. The first step would be to talk to your pediatrician, who can refer you to a sleep specialist.

As scary as the night terrors seem, it’s best for parents not to make a fuss.

You can, however, bring it up by asking your child if he or she remembers that dream, and if they don’t, leave it at that. “You don’t need to be worried about them unless there are symptoms of another sleep disorder, like seizures or sleep apnea,” said McKie. “Night terrors are just a normal, developmental phenomenon for many kids.”