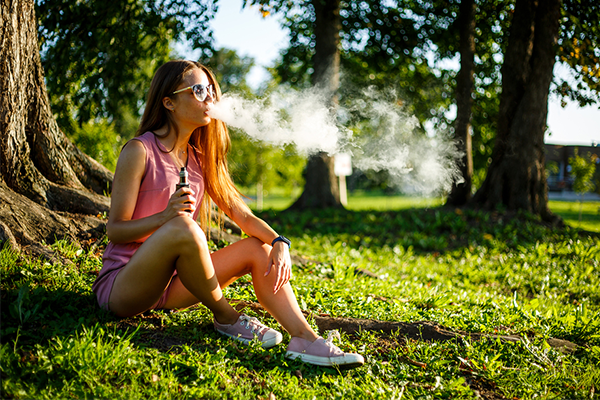 More than 37% of high school seniors say they’ve vaped in the past 12 months, according to the National Institutes of Health. And those who’ve vaped ever? That’s now at 42.5%. Almost as many sophomores (32%) and nearly 18% of eighth-graders also say they’ve tried it in the last year.

Which is why the U.S. surgeon recently described e-cigarette use among youth an epidemic. “I don’t use that word lightly,” he said.

So if you think your child would never vape, think again, added Dr. Rebecca Pierce, a pediatrician at the Children’s Hospital of Georgia who often presents on vaping. “Kids are hiding it so well—and these are good kids—so sometimes parents don’t know kids are doing it,” she said. “But don’t just assume they’re not because they haven’t brought it up.”

But just like most anything else, getting a dialogue started is the most important strategy. “You can start by telling them the concerns and dangers with vaping and why they shouldn’t be vaping,” said Pierce.

If you’re not sure how to start, try these below.

Reason No. 1: We’re just finding out now that vaping does cause lung damage—maybe permanent damage—and some people have died after smoking e-cigarettes.
The news that’s being reported about e-cigarettes is scary: To date, more than 1,000 cases of lung injury have been reported across nearly all states and there have been 18 confirmed deaths. Eighty percent of people affected are younger than 35, 21% are 18 to 20, and 16% are younger than 18.

The U.S. Centers for Disease Control and Prevention haven’t found that any one chemical inside e-cigarettes is causing the problem, which is why they’re asking everyone to stop using e-cigarettes.

The damage is similar to chemical burns in the lungs, according to the Mayo Clinic. And one Illinois teen who almost died from vaping now has lungs that are similar to a 70-year-old, according to a report from CNN.

“You’re causing damage to that lung tissue, and it’s causing wheezing like you have asthma, like you can’t catch your breath,” said Pierce. “Even worse for teens, you’re increasing your risk of lung cancer or worse issues later, since the lungs have more time to sit there with that damage.”

Reason No. 2: E-cigarettes aren’t regulated, which means no one knows what exactly is in them.
The question we should be asking our kids is this: Would you want your friends to breathe in chemicals like paint stripper, formaldehyde, lead or antifreeze?

When e-cigarettes have been analyzed, scientists have found chemicals like these and many others that aren’t safe for the lungs and are known to cause cancer. And these are just the chemicals we know about by studying certain e-cigarettes. “Street” e-cigs could have other chemicals, some of which could be potentially fatal.

Reason No. 3: Nicotine doesn’t just make you addicted.
Many teens might know that it’s nicotine that makes you addicted to cigarettes and e-cigarettes. But it’s even more than that: Nicotine has a major impact on teenage brains, which are still developing. Using nicotine products now can set teens up for a lifetime of addiction, along with side effects like not being able to focus or being more anxious or depressed.

The liquid nicotine used inside some e-cigarette cartridges is also very toxic, according to the American Academy of Pediatrics. “As little as half a teaspoon can be fatal if ingested by an average-sized toddler,” the AAP said in a recent news release. According to the latest information, there were more than 3,000 calls to poison control centers for liquid nicotine in a single year, and one child died.

Also, the delivery system of e-cigarettes is designed so that your lungs get a lot of the chemical mix with each puff. Along with being addictive, breathing in and absorbing large amounts of nicotine—one cartridge can contain as much nicotine as in a entire pack of cigarettes—can cause problems with your heart and blood vessels, putting healthy teens at risk for later heart attack, stroke and even sudden cardiac death.

Reason No. 4: We don’t know enough about secondhand smoke from e-cigarettes to be able to say that it’s OK.
Smokefree laws typically keep people from smoking tobacco at workplaces or public places in order to protect everyone from secondhand smoke. The AAP says that these laws should be expanded to include e-cigarettes. “The aerosol emitted from e-cigarettes is not harmless; it contains a variety of toxic chemicals, including some carcinogens and significant amounts of nicotine. Parents should not use e-cigarettes around their children,” said the AAP.

Ask the Question
Talking about e-cigarettes and teaching your kids about the dangers of vaping is a great start. But the next step is to ask your child, point blank: Have you ever smoked an e-cigarette? Are you thinking about smoking one?

Then, that becomes a whole other conversation.

The Children’s Hospital of Georgia has the largest team of general pediatricians, adolescent medicine physicians and pediatric specialists in the Augusta area. To make an appointment, visit augustahealth.org/kids or call 706-721-KIDS (5437).