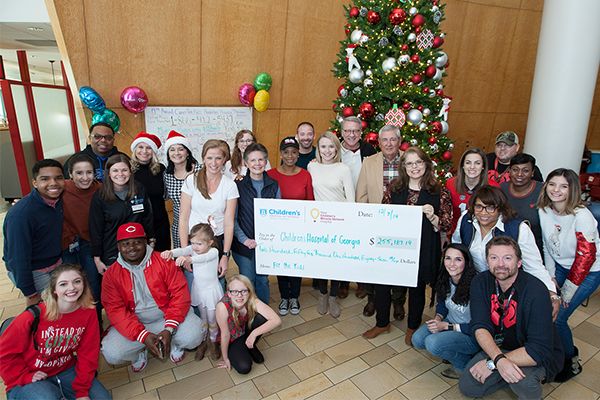 Unprecedented generosity by the Augusta community fueled a record-setting radiothon for Children’s Hospital of Georgia — and generations of young patients stand to benefit.

From Dec. 5–7, many of Augusta’s favorite local TV and radio personalities turned the Children’s Hospital of Georgia lobby into a makeshift broadcast center for the 19th annual iHeartMedia Cares for Kids Radiothon, the facility’s largest Children’s Miracle Network Hospitals fundraiser. In partnership with Augusta radio stations WBBQ 104.3, 105.7 The Bull and 96.3 Kiss-FM, as well as TV station News 12 NBC 26, Children’s Hospital of Georgia used the radiothon to highlight its extraordinary patients and the skilled physicians and nurses who care for them, all while raising money to enhance programs and services. The 2019 radiothon was the most successful yet, raising $256,417.19. That is a 15% increase from 2018’s total.

“Children’s Hospital of Georgia truly relies on community support to purchase equipment, including stretchers and beds for premature babies, and things that make the hospital fun for patients, such as playrooms, playgrounds and our two full-time therapy dogs,” said Catherine Stewart, associate director of the Children’s Miracle Network Hospitals and Children’s Hospital of Georgia Development. “We couldn’t provide those things without the support we receive during the radiothon. I love that the community wholeheartedly embraces it. It’s neat to see people from so many walks of life come together each December to donate time and money.”

Months of planning for the radiothon came down to three days in early December, when radio and TV hosts spent more than 30 hours promoting Children’s Hospital of Georgia and highlighting its need for support on air and social media. Each hour on the radio, listeners learned about a specific item on the hospital’s wish list or enjoyed interviews with and stories about young patients and their families. Similar content aired on TV as special, break-in segments during regularly scheduled newscasts. Listeners and viewers could call or go online to make a one-time donation or become a Miracle Maker with a $15-per-month pledge.

The radiothon would not have been possible without approximately 230 volunteers, many of whom spent twohour shifts in teams of up to 15 people taking pledges by phone. Other volunteers brought meals to those staffing the phone bank or worked in a pop-up gift shop in the hospital lobby. For many volunteers, it was especially meaningful to hear the stories of — and, in some cases, meet — ambassador patients who received care at Children’s Hospital of Georgia. Those patients included Hudson, who had to learn how to walk again after a case of viral encephalitis, and Philip, who was born prematurely with a congenital heart condition and underwent two heart surgeries. Their stories were inspiring — as were donors’ motivations for giving.

“We asked every donor why they chose to give, and it was so interesting and humbling to hear their reasons,” Stewart said. “Often, they said they’d been blessed with healthy children or grandchildren and wanted to help children who were dealing with illness or injury.”

A legacy of good

Previous radiothons funded a variety of important equipment and programs at Children’s Hospital of Georgia, including vein finders for premature babies, which make it easier to give intravenous therapy to the smallest patients, and special incubators for the Neonatal Intensive Care Unit. The 2019 event will have a similarly long-lasting impact on the lives of children — see “Precious Investments” to learn more.

“We want to recruit the best physicians to Children’s Hospital of Georgia, make the hospital a less scary place for children and conduct research so that maybe one day there will be no such thing as childhood cancer,” Stewart said. “The radiothon and other fundraisers make those things possible. I’m so grateful to our community for tuning into the radiothon and stepping up to help for 19 years.”

You can be part of this year’s radiothon in early December, when we’ll have some surprises in store for the 20th annual event. Watch and listen for details from our media partners and look for information on augustahealth.org in the coming months.