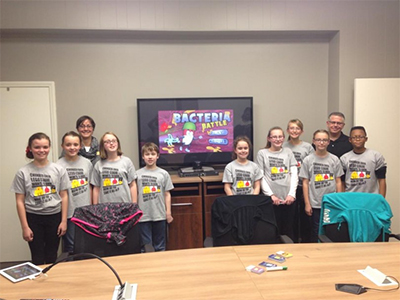 Elementary students teamed up with Augusta University to create a mobile app game for kids to help raise awareness for Cystic Fibrosis, an inherited life-threatening disease that mainly affects the lungs and digestive system.

The students at Chukker Creek Elementary School came up with the concept to educate others about Cystic Fibrosis (CF), designed characters and researched a number of facts that are included in the game.

The game, Bacteria Battle, is a fun, educational, action game that makes the player an antibiotic that fights off bacteria. Using a military-theme for the game, a general will assign missions to educate you about CF as well as how it affects the lungs and pancreas.

The game also includes a section that allows kids to chart their doctor’s visits and give them bonuses for checking in and answering if they have taken their medication or not, according to Jeff Mastromonico, director of the Educational and Collaborative Technology Department. 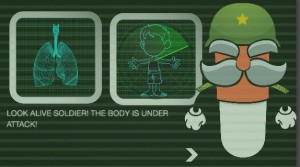 Within that department, the Instructional Design and Development (IDD) team developed the gameplay and the interpretation of the graphics. The team met with the students to review the game and the students “red pen” it with the things that they want to change.

The concept of the game was introduced after IDD published a Diabetic Virtual Pet game that was developed in collaboration with the University of Houston and teaches children with diabetes how to make healthy food choices. Alecia Kinard, mother of an infant with CF who is a patient at CHOG, saw the app and approached Mastromonico with the idea of collaborating with Chukker Creek for CF.

“She is the sponsor for the Lego League at Chukker Creek and the Educational portion of their competition this year was to show how technology can educate,” said Mastromonico. “She approached me with the idea and it seemed the perfect opportunity for community outreach as well as showing the students how technology and education can go hand in hand.”

The IDD team has also created many projects for and with Children’s, including a series of iBooks and other games for the kid patients like Allergen Alert and EPI-GERMIS.

The game is available on the iPhone, iPad and Android as a mobile game. For more information about Educational and Collaborative Technology or other apps they have created, visit jaguware.com.

There has been a problem with your Instagram Feed.