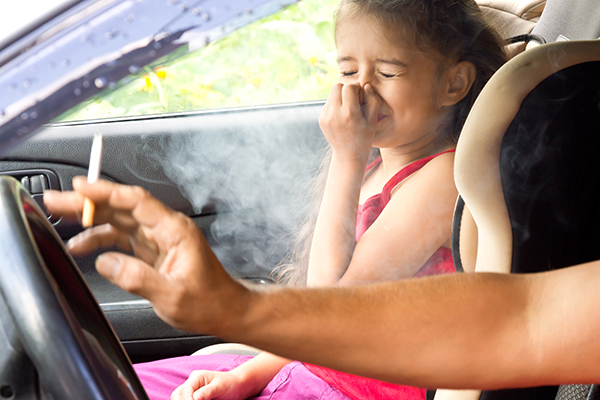 We all know what firsthand smoke is. Even secondhand smoke. But thirdhand smoke? What could that possibly be?

Thirdhand smoke is the residue that is left over from secondhand smoke. After the smoke has been released into the air, it mixes with other common air particles, becomes more of an air pollutant, and settles on surfaces, clothing, skin or even in hair.

For example, say that you visit friends who are smokers. You visit them in their homes, but they don’t smoke in front of you. When you get back to your home, you notice that your clothes smell like smoke. That’s thirdhand smoke. Because your friends smoke in their homes, their surfaces and furniture are holding onto those smoke particles, and you have come in contact with them. Researchers have found that even after individuals have quit smoking, the air pollutants of thirdhand smoke can still be found in their homes years later.

Thirdhand smoke can be inhaled and even ingested by others, and of course, children are the most vulnerable to it. It’s perfectly normal for babies and children to crawl around on the carpet, teethe on furniture and play with pets, but all of those surfaces can contain harmful amounts of thirdhand smoke within the fibers and fur.

According to the American Academy of Pediatrics, thirdhand smoke can contain more than 250 potentially dangerous chemicals. Secondhand and thirdhand smoke is often the cause of ear infections, bronchitis, pneumonia and SIDS (Sudden Infant Death Syndrome) among other chronic health issues.

The only sure way to protect your family from secondhand and thirdhand smoke is to quit smoking and not allow smoking in your home or car. This includes e-cigarettes. If you or someone you know smokes, here are some tips to keep your home as smoke-free as possible.

Every year on the third Thursday of November, the nation encourages smokers to participate in the Great American Smokeout, an event where Americans who smoke can commit to quit for a day. By quitting tobacco for a single day, smokers can make a positive impact on their health and hopefully be inspired to quit for good.

The Georgia Cancer Center offers a tobacco cessation program to help tobacco users quit. The program includes a clinic visit, health assessment and a series of cessation classes for support.