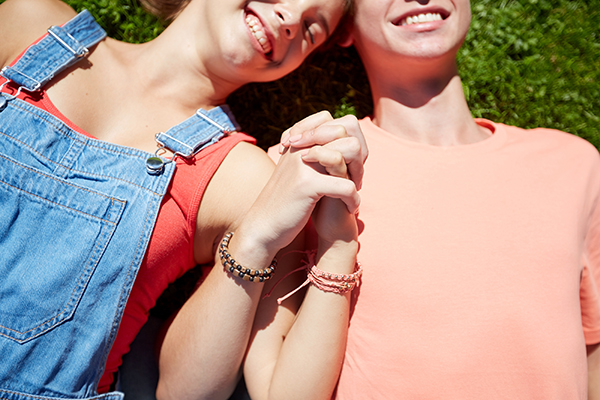 Dating violence happens—and in teens, it happens more often than you might think.

According to LoveIsRespect.org, about 1 in three teens in the United States is a victim of physical, sexual emotional or verbal abuse from someone they’re dating. Other statistics have found that in middle school students, one in three say they have delivered physical abuse, 77 percent have delivered emotional abuse and 1 in 10 say they’ve taken part in cyber dating abuse.

As parents, it’s up to us to show our kids what a healthy relationship looks like. And those conversations should start early.

“We have this cultural thing with little kids where if someone’s teasing you, we often say, “Oh, it’s because they like you.’ That can turn into ‘If someone’s mean, that means they like you,’” said Dr. Christopher Drescher, a child psychologist at the Children’s Hospital of Georgia. “We don’t want to normalize this behavior so that when a child reaches adolescence, they associate being mean with liking and attraction.”

Start talking to your teen

While it’s important to model healthy relationships to your child starting at a young age, also plan to talk early and often about dating abuse—focusing in on the fact that it’s never OK. Middle school is a good time to start since most young teens aren’t dating just yet. “You want to be ahead of the curve, not behind, when it comes to these conversations,” said Drescher.

You don’t necessarily need to cover all of this at one time, but you should share these messages:

Some basic dating “rules” should also be covered when it comes to supervision and limits. These probably look different parent by parent and child by child, but for the most part, early relationships should always be under parental supervision. For example, parents will need to drive and may want to accompany young dating teens when they go out, and kids definitely shouldn’t be left alone in a bedroom or basement. As teens grow older and conversations continue, depending on how responsible they are, parents will likely relax a bit on supervision.

These conversations should also talk about the positive side too: How do you want to be treated in a relationship? What are you looking for in someone to date? And how should you treat someone you’re dating?

It may come as no surprise that teens who say they’ve been abusers also say they were bullies when they were younger. Teens who don’t communicate well, who have problems regulating their emotions, like or who were exposed to violence, abuse substances, have depression and anxiety, or have little social support also are at high risk for becoming abusers.

And on the flip side, teens who are victims of dating abuse also may have been targets for bullies when they were younger and also report depression/anxiety, substance abuse or poor social skills. A poor relationship with parents is also a risk factor, which is why having that strong, positive bond with your child is so important, among many other reasons.

Know the signs of dating abuse

Unfortunately, even if you have a strong relationship with your child, dating abuse is something your child may not want to share. That’s because most victims feel a strong sense of shame, which is why it’s important for parents to believe a child and not to suggest in any way that the abuse is their fault, says Drescher.

Some warning signs that abuse may be going on include:

“If you suspect abuse may be happening, step in,” said Drescher. “The consequences of ongoing abuse are significant. The most startling is that exposure to violence such as dating abuse in teens and young adults increases the risk for suicide by 1.5 times. And then there’s the risk of post-traumatic stress disorder and developing other problems as adults, such as difficulty with relationships going forward.”

While it may sound like a broken record, when it comes to any major issue with your child, prevention is better than intervention, adds Drescher. “Start the conversations early and keep those lines of communication open. It’s crucial because if you’re waiting until adolescence and your child is already in a relationship before talking about these things, you’re behind at that point.”

The Children’s Hospital of Georgia has one of the area’s largest child and adolescent psychiatry and psychology programs, with specialists who can help your child manage stress, anxiety and depression. For an appointment, call 706-721-9331.