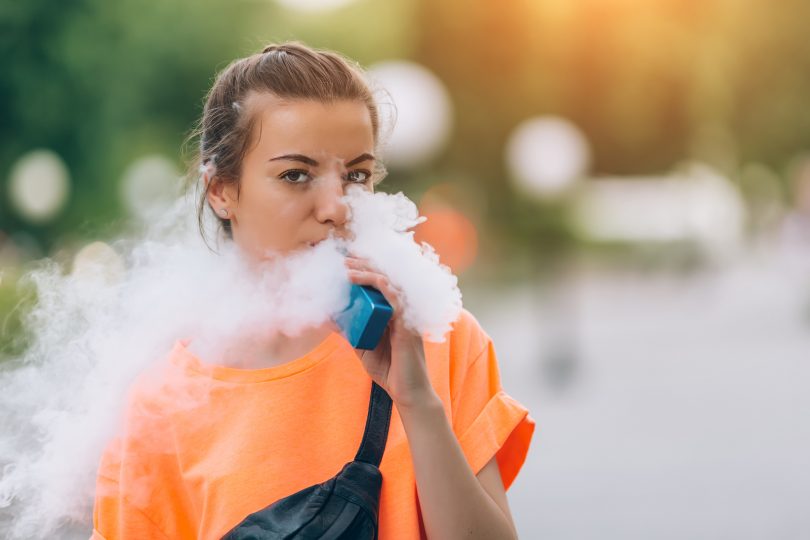 When Dr. Rebecca Pierce, a pediatrician at the Children’s Hospital of Georgia, recently talked about vaping to a group of parents, then their children, at a local church, she says the parents were shocked at the statistics she shared.

The kids? Not so much.

“The kids knew a lot. They knew the e-cigarettes had nicotine, some of them were selling the pods to other kids at school at a marked-up rate, and some had even found ways to put marijuana into the pods,” she said. “Their guess was that probably close to 75 percent of kids in high school are using these products. You get a large social gathering on a Friday night and it gets passed around. It’s very easy to use in class, you just bend over your backpack and take a hit. Or, kids share it in the locker rooms.

“When you know how dangerous these products are, it’s terrifying.”

Popular culture over the past several years says that when compared to cigarettes, e-cigarettes aren’t so bad: “They’re just water vapor, right?”; “You know there’s not any nicotine”; or “It’s a great way to keep kids from smoking.”

Due to market demand, 99 percent of the e-cigarettes being sold today have nicotine. It’s bad enough that nicotine is addictive—but because large amounts of nicotine can be delivered so quickly through an e-cig, the addiction can be even stronger than with cigarettes.

Then there are the significant effects of nicotine on a teen’s developing brain. “Think about this: One cartridge can have as much or more nicotine than in a pack of cigarettes, and a kid could go through one cartridge in a day,” Pierce said. “The reason this matters so much is that nicotine can have lasting effects on the adolescent brain up to age 25. It’s a neurotoxic effect that can slow down executive function and neurocognitive processes.”

And when Pierce says “lasting effects,” she means they are permanent. “Kids end up not being to concentrate, or struggle with multistep processes—all of those higher brain functions.”

The chemicals in e-cigarettes have also been found to be cytotoxic, which means they will likely go on to lead to cancer down the road. “We just haven’t had e-cigarettes around long enough to see them, but these teens have 75 plus more years on this planet, and we will likely see an increase in not only lung cancer, but throat, mouth and nose cancer from the damage done by the exposure to nicotine and any of the other substances in e-cigarettes.”

Because the other fun fact? E-cigarettes are still unregulated, which means manufacturers can put anything in them. For example, tests on e-cigarettes have found much higher levels of nicotine than what manufacturers say are in them. Other studies have found that the metal from the coils that vaporize the solution also ends up in the lungs—“and who knows the long-term consequences of those metals on your child’s delicate lung tissues?”

The U.S. Food and Drug Administration is starting to crack down. In November, it issued a proposal to restrict sales of flavored e-cigarettes in stores to only menthol, tobacco and mint, in part to help reduce what’s been described as “skyrocketing rates of e-cigarette use by teens.” The fun flavors are part of the reason why teens like e-cigarettes, with mango being the most popular.

In December of last year, the U.S. Surgeon General called e-cigarette use among youth “an epidemic:

Use is highest among non-Hispanic, Caucasian boys from higher socioeconomic levels.

What parents can do about vaping

When Pierce spoke to the group of teens about the dangers of e-cigarettes, she says she got mostly blank stares. So what can parents to do to get through to their own children, when advice from an expert is seemingly ignored?

It starts with an honest conversation about the dangers of e-cigarettes. And it can’t stop with one conversation.

Parents should also set the expectation that these products aren’t OK to use at home, school or out with friends. Most importantly, parents have to model that behavior too.

If you or your child is addicted to e-cigarettes, talk to your doctor about how to quit. Nicotine replacement products like the patch or gum weren’t designed for kids, but could be helpful. Antidepressants like Wellbutrin could be another option that can help.

Be supportive—but also firm that e-cigarettes aren’t safe and that your child won’t use them. One resource you can share with your middle-schooler is vape.org. Teens can also text “QUIT” to 202-804-9884 to access the Truth Initiative’s free e-cig quit program.

Then, when it comes to overcoming peer pressure to “come on, just take one hit,” parents can help teens come up with messages to say to their friends, for example:

“Still, prevention is the best thing to do,” said Pierce. While a child of, say, 3, is too young to understand about nicotine and specific dangers of cigarettes and e-cigarettes, you can start talking about how these products are “yucky.” Then you can start having more detailed conversations when your child is about 8 years old.

If nicotine and cancer aren’t bad enough, it’s estimated that the batteries in about 2,000 e-cigarettes have exploded, causing burns to users and fires. There have also been about 8,000 poisonings of children, and one child in the United States died after drinking the solution inside a pod.

“How many Samsung phones exploded before the company did a complete recall?” said Pierce. “It’s hard, but I think we’re going to have to start having these conversations earlier and earlier.”