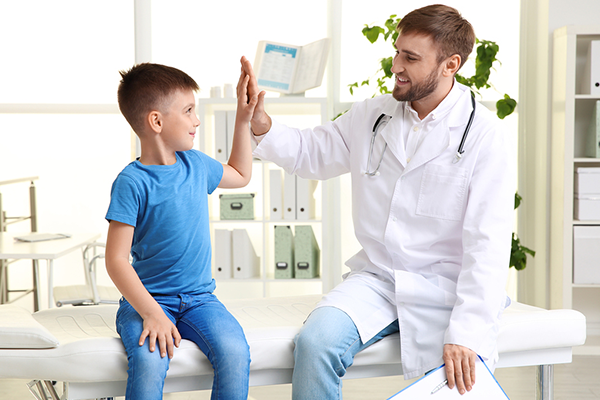 We call it flu season. Your child might know it better as “Do I really need to get a shot?” season.

Flu season typically peaks December to February, but it can start as early as October and last as long as May. And even if you wash your child’s hands a million times and live like hermits all winter, experts say the flu shot is still your best chance at keeping the flu away.

It takes about two weeks after the shot for the vaccine to be fully effective at protecting you. So the best time to get it is by October/November, before the flu really hits.

All of these are very good reasons to get the flu vaccine—and to get it early. But what if your child really, really hates getting shots? Here’s what you can do:

Be honest. “That’s really important,” said Dr. Kelly Watson, a pediatrician at Augusta University Health Grovetown. “If children ask if they’re getting a shot today, say yes, but put the focus on the fact that it’s just a tiny pinch and it’s meant to help keep them from getting sick. If you tell them they’re not getting a shot because you don’t want them to be scared but they do, they’re going to be even more upset because they were told an untruth.”
But, be careful of your wording. You want to explain that the shot helps your child keep from getting sick. But you don’t want it to come off like a threat, as in, “If you don’t get this, you’re going to get really sick,” or “You’re going to be in big trouble if you don’t get this shot.”
Get the timing right. You know your child best: Some children might want to know a couple days in advance so they can prepare themselves, while other kids might only get more anxious. In most cases, says Watson, telling kids the day of is fine.
Get your pediatrician to help. Definitely let your child’s doctor and nurse know if your child is afraid of getting a shot. They can talk patients through what’s going to happen before, during and after the shot to help make it easier.
Use a distraction. Bring a special toy or book to help distract kids while the shot is happening. Bubbles or pinwheels are especially great because they can help kids practice some breathing techniques to help them relax. “Most offices are also OK if during the process the child wants to hug the parent,” said Watson. “Nurses can work around that.” And if you’re a nursing mom or are bottle-feeding your baby, feeding your infant before, during and after the shot is also a good distraction option that’s also really comforting.
Ask about a non-shot option. FluMist is a nasal spray vaccine that could be an option for anyone between ages 2 and 49 who is healthy and doesn’t have one of a list of conditions like asthma, diabetes or other chronic diseases. It’s also not for women who are pregnant. In the past, there were some concerns that the nasal vaccine wasn’t as effective as the shot, but those precautions have been removed. Now, organizations like the American Academy of Pediatrics just say that everyone 6 months or older should get an appropriate flu vaccine for them. That could include FluMist, if it’s available at your doctor’s office.

Did You Know This?

The slightly bad news for parents and kids is that if it’s the first time they’re getting the flu shot, they’ll actually need to get a two-part shot. “For infants and children 6 months to 8 years old, if it’s the first year they’ve gotten the vaccine, they get two doses, separated by one month,” said Watson.

Some parents may worry that if children have or are suspected to have an egg allergy, they can’t get the flu shot, since the vaccine is grown inside an egg. But that’s not true, said Watson, although anyone who’s had an allergic reaction to eggs that’s more than hives should get the vaccine at a doctor’s office just in case (not a drive-through clinic). “The only contraindication to getting the flu vaccine is if you’ve ever had an allergic reaction to the flu vaccine or any component of the flu vaccine in the past,” she said.

In the past two years, the flu has gotten a lot of news coverage due to more outbreaks and higher complications. That’s because recent flu strains, specifically type A flu, has caused more severe illness. While the vaccine can’t provide a 100-percent guarantee that you or your child won’t get sick, you have a much better chance than if you don’t get the shot. And if you do get sick, you probably won’t be as sick as someone who is unvaccinated.

Regular handwashing, keeping kids at home if they have flu-like symptoms and teaching kids to cover their mouths and nose with a tissue or their sleeve when they cough or sneeze are all good hygiene tips that can help keep everyone safe from flu. “Getting enough sleep, managing stress and eating a healthy, nutritious diet all help your immune system function better as well,” said Watson.

And going back to that shot: If your child is still really adamant that he or she just does not want a shot, Watson has this final tip. “I’m not opposed to bribery,” she said with a laugh. “A reward is a great incentive.”