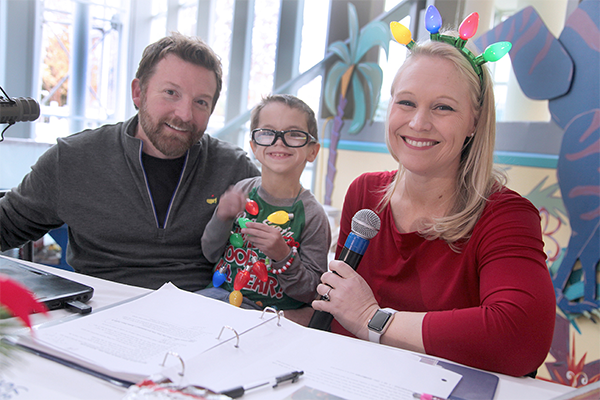 It was long afternoons in the hot sun, boiling hundreds of pounds of boiled peanuts, and sweetening gallons of lemonade. But it was worth it. At last year’s Radiothon, 10-year-old Reese made a very important donation to the Children’s Hospital of Georgia: $16,000 that he raised selling lemonade and boiled peanuts on Lexington Road on the way to Athens during University of Georgia game weekends.

Reese, you see, says the Children’s Hospital of Georgia is his favorite place in the whole world. He’s been here nearly every week since he was born with multiple birth defects that have required more than 50 surgeries (“I stopped counting at 50,” said his mom, Alicia) and regular visits to 13 different clinics.

And nothing can take the smile off Reese’s face, especially when he’s talking about his hospital.

A few months after Radiothon, Reese poked his head into the office of Catherine Stewart, associate director of development for Children’s Hospital of Georgia. “Miss Catherine,” he said seriously, “what are we gonna do about my money?”

“Well,” said Stewart, “it’s your money, so let’s have a meeting to talk about what you want to do with it.”

So that’s how a few weeks later, Dr. Valera Hudson, pediatrician-in-chief; Kim Basso, director of women’s and children’s services; and Stewart were sitting in a conference room when Reese strode in. He was dressed to the nines in a tie, dress pants and coat, with a box of Krispy Kreme donuts and coffee. He sat at the table and announced, “I’m the CEO; this meeting has started.”

Big smiles all around. Then serious business: For much of his time at the children’s hospital, Reese has been immune-compromised. That means there are certain areas he can’t go, to help make sure he doesn’t get sick. That includes the playground on the fourth floor.

Even though there are playrooms available for children who are immune-compromised, “Reese wants to have a playground where kids like him can go play, a whole area where they can slide or have swings. He’s thrown out the idea of a rock climbing wall,” said Alicia.

It’s a big dream, and Reese and his family are used to thinking big. “They told us when Reese was born that he wouldn’t leave the OR,” said Alicia. “And now he’ll be 10 a week after Radiothon.” “Double digits!” added Reese.

“It’s a huge milestone for us,” said Alicia. “Dr. Charles Howell [then chief of pediatric surgery] told us that he couldn’t find in any literature ever a child with the combination of birth defects Reese had.”

2019 has been a good year. “Reese is in excellent health,” said Alicia. From visiting the children’s hospital every week, Reese now comes about every month to see nephrology and every three to six months for his other services. He had just four surgeries this past year—one year, he had 15 over just 55 days. “He was completely tube-fed, but recently he decided he liked food and he started eating,” said Alicia.

What are his favorites? “Guacamole, pizza, mac ‘n’ cheese,” said Reese. “Chik-Fil-A’s, but mine will do in a pinch,” says Alicia with a laugh. “And taco triangles,” added Reese, which is an Alicia recipe of deep-fried tortillas stuffed with beef, taco sauce and cheddar cheese.

At this year’s Radiothon, Reese plans to donate another big check toward his playground dream and spend a few hours helping the DJs. “We try to do as much as we can,” said Alicia. “Radiothon has become our celebration before Reese’s birthday, that we’ve made it another year and that we have such an amazing place to help us make it another year—really, helped us make it past that first day.”

That families give to Radiothon and the Children’s Hospital of Georgia may be a given: “If it weren’t for Radiothon and the donations and for the children’s hospital being where it is, we’d have to drive three hours [to Atlanta] anywhere from once to several times a week for Reese’s care. I don’t even want to think about how difficult that would be,” said Alicia.

And for everyone else: “I’ve been in countless different situations where one person says, ‘Hey, I know so-and-so needed surgery,’ or ‘My niece needed to be sedated for a dental procedure.’ Someone in church, someone in your neighborhood, your future kids, your grandkids—there’s always going to be a child somewhere who’s connected with you who needs a children’s hospital. And this hospital doesn’t care for just the x, y and z that’s medically wrong—they treat the entire child, the entire family.

“If we don’t support it while it’s here now, we may not have it later.”