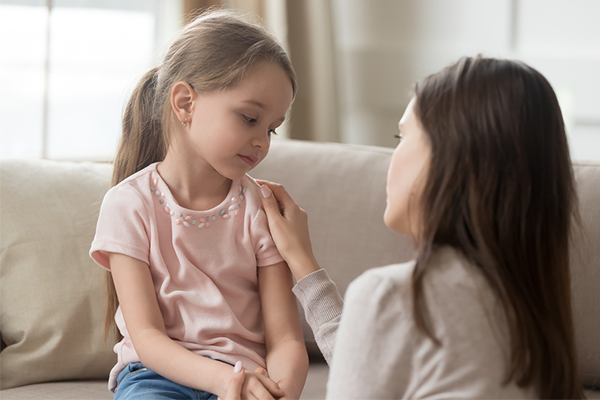 “I didn’t do it,” insists your child, even though you’re pretty sure he or she did.

All kids start knowing how to lie around ages 2 to 3, and even though it might be frustrating, funny, or make you worry, “Lying is developmentally normal,” said Dr. Alex Mabe, a pediatric psychologist at the Children’s Hospital of Georgia.

It usually starts at this age because kids are now more socially aware. It can begin with lying to protect someone’s feelings—or to keep themselves from getting into trouble. Lying usually peaks at ages 6 to 8, then starts to decline when kids become even more socially adept. “They realize telling the truth has even more value than escaping from punishment,” said Mabe.

Still, this value has to be taught. Here’s how you can start.

When you hear: “Grandma, these pink fluffy bunny pajamas are my favorite.”

As parents, more likely than not, it’s us who give our child a frantic whispered instruction not to hurt grandma’s feelings. Sure, it’s a “white” lie, but if we’re working to teach our child not to lie, a better way to go might be to encourage them to find something nice—and truthful—to say, like, “Grandma, these pajamas look so fluffy and warm. Thank you!” “It may not be their whole opinion, but you want what they say to be truthful,” said Mabe.

Starting very early on, it’s pure instinct for kids to try to avoid being punished, whether that’s for breaking a toy, forgetting to do a homework assignment or making a mess. “Think about it: When someone accuses you of doing something that might get you into trouble, the first thought that comes to mind is often a lie,” said Mabe.

This form of lie is likely not an attempt to get someone else in trouble, but instead is an impulsive response to avoid getting into trouble. So in this case, especially if you are pretty certain it’s a lie, get your child to slow down and think about his or her answer again. “The way I usually recommend parents do that is to tell the child that you have a pretty good idea of what happened. Tell them to slow down, and not answer right away but to think about it. Then ask again,” said Mabe.

If children realize that you know the truth—and if you follow that up by explaining that if they took the cookies and own up to it, their punishment will be less than if they continue to lie—“kids will start to learn that telling the truth is a good idea,” said Mabe.

When you hear: “I’m the tallest, smartest, strongest and best person in the whole class!”

This type of lie is a form of self-deception. “When we lie to ourselves, it’s because we don’t like to see ourselves in a sometimes negative light,” said Mabe. “So sometimes kids make claims of being better than we really are or the world is better than it is.”

The interesting thing about this type of lie is that studies have shown that people who are depressed generally are more accurate in understanding their environment and situation than people who are not depressed. “Some people might then say, ‘So, do you have to lie to yourself to be happy?’” said Mabe.

Not at all. “There has to be a balance between being self-critical and self-deceptive,” said Mabe. Kids who tell wildly boastful stories—“Everyone cheered for me when I came to school today!”—may have low self-esteem. There’s no need to feed into this, or, on the other hand, to force your child to say that wasn’t true. Move on to another topic, but keep on making sure your child hears from you about the good things they really do have going on for them.

When you hear: “I didn’t take that. My friends did it, and they made me come along. It was John’s idea.”

Then there’s another level of lying—when a child does something wrong, and blatantly lies to cover it up, deliberately blames their own bad behavior on someone else, or lies to hurt someone else. “This is very problematic and can often lead to rejection and isolation, leading to even more problems for these kids,” said Mabe.

He suggests going through these steps:

The important thing to remember is that everyone lies at some point or another, and it’s normal, even if it’s not the best policy.

So parents, do your part by helping to model truth-telling. That means, for example, no asking kids to “tell them I’m not home” when you get a phone call you don’t want to take.

“The second thing parents can do is to make sure interactions around truthtelling aren’t emotionally distressing, so there’s no alternative but to lie,” said Mabe, like not getting loud and angry when you find out a child did something wrong. “Most of us would be tempted to say, ‘I didn’t do it,’ out of fear of how a parent’s going to respond. It needs to feel safe to tell the truth.”

Parents also sometimes may not want to admit to their child when they themselves have done something wrong. But owning up to mistakes is another great way to model the right behavior and teach kids to be accountable.

Still, parents should only really worry if their child lies a lot—or if their lies are designed to hurt other people. Otherwise, keep on teaching your child to tell the truth, and over time, he or she should see for themselves that honesty really is the best policy.

“Certainly when social understanding kicks in, telling the truth is extremely important for developing social cohesiveness and trust,” said Mabe. “If you don’t tell the truth, you lose those connections eventually. People don’t like being lied to.”

The Children’s Hospital of Georgia has the largest team of general pediatricians, adolescent medicine physicians and pediatric specialists in the Augusta area. To make an appointment, visit augustahealth.org/kids or call 706-721-KIDS (5437).