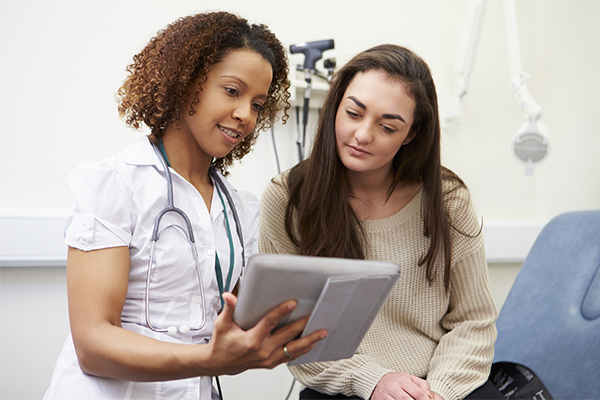 That’s the message teenage girls often hear. “A lot of times, that is a very normal part of those early periods,” said Dr. Erin Latif, an OB/GYN at Augusta University Health.

And a lot of times, that’s why teen girls don’t talk about when their periods really, really hurt—when the next month feels even worse, when pain medicine doesn’t help, and when it hurts so bad all they can do is curl up and cry.

That’s not normal—and it could mean your teenager has endometriosis.

What Exactly Is Endometriosis?

“Endometriosis is not super common in teens, but it’s actually more common than people realize,” said Latif. “It can even be diagnosed before onset of puberty, but that’s rare.”

Every month, a girl or woman’s uterus grows a special lining, and an egg is released from the ovaries into the uterus. If the egg isn’t fertilized, the lining breaks down, becoming your period.

With endometriosis, the cells that make that lining spread outside of the uterus, inside your abdominal cavity. When hormones trigger those cells every month, they grow, including on your ovaries, bowel and bladder. All of that abnormal growth can lead to cysts and masses—and cause a lot of pain, usually during but also when you’re not having your period.

Any teenager with pain during periods that seems to get worse over time and doesn’t feel better with pain medicine should see a gynecologist, says Latif. Other possible symptoms include pain when you use the bathroom as well as blood in the urine or stool. Endometriosis doesn’t necessarily cause heavy periods, but women with endometriosis do tend to have heavier cycles that soak through multiple pads or tampons over several days.

Will I Need a Pelvic Exam?

Young teens might choose to tough out the pain and not tell a doctor because they’re scared that they will need a pelvic exam. “One thing I like to stress is that a pelvic exam is very seldom required during a first visit to a gynecologist,” said Latif. “We avoid pelvic exams as much as possible with younger girls.”

In many cases, girls can talk to their pediatrician about their pain, and he or she may prescribe NSAIDs like ibuprofen to alleviate the pain, along with hormone therapy such as birth control, which can slow the progression of endometriosis. It’s best to start taking NSAIDs a day or two before the period is supposed to start and continue taking them throughout the heaviest and most painful days of the period, while birth control can be in the form of a daily pill or an injection every few months.

For more severe pain, it’s a good idea to see a gynecologist, who can offer other treatments and answer more questions about hormone therapy and what exactly is going on with a girl’s body.

A gynecologist can also make sure nothing else is going on that could be causing the pain, such as an imperforate hymen, which could cause monthly pain and prevent periods from happening normally.

If a girl is still having a lot of pain after three months of trying NSAIDs and hormone therapy, the next step would be to consider surgery, says Latif. “We typically do a laparoscopy to look for endometriosis and remove as much of the endometriosis as we can.”

Still, it’s a lifelong problem. Surgery will improve the pain by removing the endometriosis lesions, but patients will need to stay on hormonal suppression after surgery. Even then, 56% of women say that their endometriosis has returned after five years.

Having a Baby Down the Road

A young teen who’s 12 or 13 might not ask about fertility, but older teens who are already thinking about marriage and family down the road might worry: How will this affect if I can have a baby?

“That’s the big concern,” said Latif. “The reason early recognition of endometriosis is so important is so we don’t let it grow out of hand for years, which can cause extensive scarring of the fallopian tubes and damage the ovaries. Even if there’s not a lot of scarring, the inflammation from endometriosis can make it hard for patients with this disease to become pregnant. The best thing to do is to talk to your gynecologist once you’re ready to start trying to have a baby.”

For teens especially but for any woman with endometriosis, “Don’t wait,” said Latif. “We have good treatments today to help bring relief from pain and also protect your fertility once you are ready to start a family.”