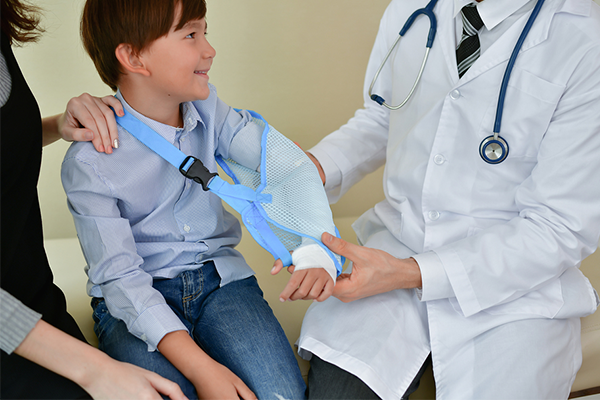 “Despite years and years of medical technology, cast treatment is the standard of care for 95% of what we do,” said Dr. Cory Bryan, a pediatric orthopedist at the Children’s Hospital of Georgia.

And despite what most parents might wish, today’s casts still aren’t removable, they definitely aren’t waterproof, and they can be uncomfortable—for the long time that it can take for a bone to heal.

So your child has a cast: What do you need to do to take care of it?

“You have to keep the cast away from water,” said Celandria Weaver, lead orthopedic cast technician at Augusta University Health.

“Despite urban legend, there is really no such thing as a waterproof cast,” added Robert Skidmore, lead orthopedic technician at Augusta University Health.

Casts often stay on at least three weeks up to three months. So bathing can be a challenge, especially with a squiggly, wiggly kid. Try this:

Rule No. 2: “Even if it’s itchy, don’t stick anything inside the cast.”

Weaver once found a butter knife down inside a cast, and Bryan, a dinner fork. While it sounds funny, any object stuck down inside a cast can create a pressure wound, which can lead to a pressure ulcer and dangerous infections. The wound hurts at first, but shame or fear might keep a child from admitting what he or she did. Then the wound stops hurting because the nerves are damaged, the child still doesn’t speak up, and weeks go by until the wound and infection become really severe.

There are better ways to help with itching. Since it’s dry skin and dead skin buildup that make casts itch, help your child stay hydrated, cool and dry as much as possible. Your cast technician can also apply a thin coat of oil-based moisturizing lotion before putting on the cast to help keep skin moist. Tapping the outside of the cast or applying something that vibrates to the outside of the cast—causing a mild “scratching” effect—can also help, said Skidmore.

You can also try a blow dryer on the cool setting to blow air into the cast, said Weaver. And if kids are really complaining about itching, especially before bedtime, Bryan suggests offering an appropriate dose of Benadryl.

For the most part, unless a cast feels heavy to your child, he or she won’t need to use a sling. So casted arms swinging around freely on the playground or during gym class can be a real hazard to kids within striking distance. “And we often tell parents, be careful they don’t hit themselves too,” said Weaver.

At the same time, even with a cast, kids should be encouraged to move around and be as active as they want to be. “It’s always a good idea to have kids be as mobile as possible,” said Bryan. “The more you can move, the better so you can be as functional as possible.”

The only precaution is to avoid anything where a child has a risk of falling, like gymnastics or contact sports.

A Few Special Items to Note

When your child first is diagnosed with a bone break, he or she might start with a splint or a “soft” cast, which has some room to allow for swelling—then transition to a hard cast a few days later. During those early days, if your child has pain, use ibuprofen—or your doctor might prescribe a short-term narcotic. But for the most part, a break shouldn’t hurt after the first week since the cast is holding the bone in place.

If your child does have pain, call your doctor. It could mean a pressure sore has developed, which should be seen right away.

Some children with broken legs or who have hip problems or hip or pelvis surgery might need a spica cast, also known as a body cast. The cast covers both legs, the waist and abdomen and may need to be worn for six weeks up to three months. These casts are “incredibly challenging” to live with, since children aren’t able to walk or use the bathroom without help, said Bryan, so it’s important for parents, doctors and cast technicians to talk over exactly what to expect.

After the cast is off, be prepared for the skin to look like “alligator skin.” Don’t feel like you have to scrub all that dead skin off right away, said Bryan. It will naturally wash off over a period of up to two weeks. The limb might look a bit thinner too because the muscles haven’t been used, but those muscles will build back too in a matter of weeks.

Finally, remember this: “As hard as it is sometimes to maintain a cast, it beats surgery any day of the week,” said Bryan. “It’s the one treatment that has stood the test of time. And it’s really an art to put on a cast, so craftsmanship like we have at the Children’s Hospital of Georgia is a very important part of good care.”