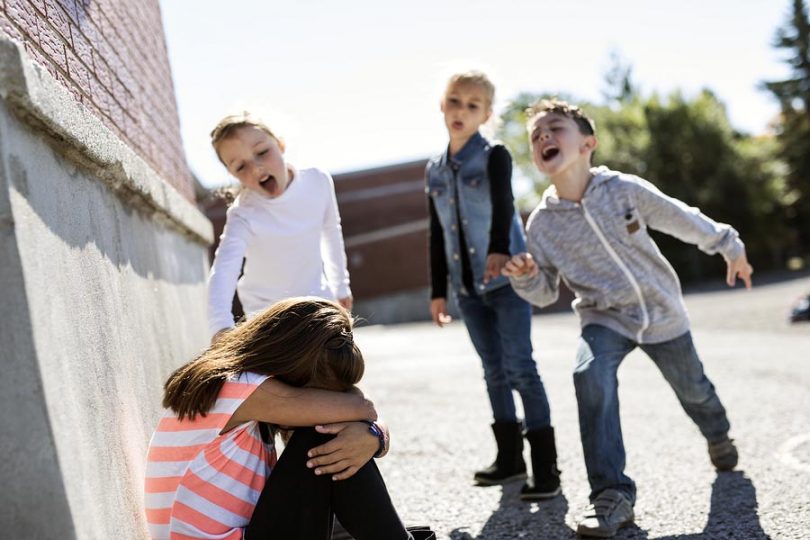 In the school environment, you may have the geniuses and the drama kids. The cheerleaders and the football players. The band geeks and the punks. The goths and the preppies.

You also may have the bullies and the victims.

It can be a hard label to accept. No parent wants to think that their child is causing someone else pain.

“Also with bullying, you have to recognize that it’s not a single incident,” said Drescher. “If there’s one time your child gets in a fight and your child was the aggressor—not that it’s not a problem, but that’s not bullying. Bullying is repeated aggressions by someone with relatively more social power than the other person.”

The interesting thing is that there are some common risk factors in being either a bully or a victim. Both tend to have poor social competence, said Drescher, which means they aren’t great at figuring out what to do in certain social situations. For some, that trait makes them a target, but for others, it turns into aggression.

While physical bullying is certainly easier to see, relational bullying—where a kid makes fun of or humiliates another child—may be even more common, and in fact often has worse outcomes in terms of mental health for the victim. Cyber bullying is another form that’s become more widespread in recent years.

Before you talk to your child, it’s important to step back and really take a hard, nonbiased look at what’s going on.

It just has to be said: Parental behavior can be related to bullying, and it’s typically related to extremes, either being overly harsh or physical with a child or being overly permissive, lacking supervision or discipline. “It’s important to understand the balance between warmth and rules/discipline, and to evaluate if there’s a lack in either,” said Drescher.

Next, consider your child. Sometimes kids bully in response to problems at home, socially or even physically. For example, untreated ADHD can sometimes lead to bullying behavior. Anxiety and depression, having a hard time getting along with others, academic problems—all of these could be impacting your child and leading to overly aggressive behavior.

Then, take a deep breath, sit down and have the conversation.

Your goals are to help figure out what potentially could be triggering the behavior and fix it; help your child understand how his or her behavior is affecting others; and, most importantly, to stop the behavior by introducing very specific consequences. “After all, one reason kids bully is that it’s working for them,” said Drescher. “They’re getting what they want by being aggressive. You want to cut that off and not allow that behavior to work out.”

And although the internet is full of examples of parents punishing kids visibly on social media by making them wear signs or humiliating them in other ways, just don’t go that route, said Drescher. Even though the world might laugh and cheer on the new-wave parenting tactic, “You’re now modeling bullying,” he said. “So it becomes an issue of ‘Do as I say, not as I do.’”

Appropriate consequences for bullying include restricting privileges depending on what’s important to a child. For some, that could be use of electronics, their car or an upcoming trip. For other kids, losing those privileges may not be a big deal. That’s when you can turn to good, old-fashioned work, such as getting up on Saturday morning to clean all the gutters.

When a child has wronged someone, it’s also important for your child to repair—and even over-repair—the damage that’s been done, said Drescher. “For example, if a child has been making fun of someone else because of her clothes, perhaps that child should spend her own money on clothes for her. Even though they might not be happy or on board, in some way, they will realize this is the right thing to do to make up for what they’ve done.”

In addition, because bullying behavior typically happens at school—and out of sight for parents—make sure to communicate regularly with the principal and teacher so that you know what’s going on and can ensure that all of you are enforcing the same guidelines.

Then, over time, if your child has made significant progress and you haven’t gotten a call from the school in, say, a month, a reward is also appropriate, like a special outing. “This is when you can also make sure your child knows that you’re proud of him or her for behaving differently,” said Drescher.

Remember, just as when a child is a victim of bullying, when your child is the bully, it’s important to step in quickly. “You don’t want it to become severe, where not only the family and school are involved, but also the justice system,” said Drescher. “Plus, it’s rare for a child who is bullying to be doing great in every other aspect of his or her life. So it’s important to consider if your child needs help with schoolwork, more involvement in a faith community or something else. You want to look for multi-system support when going forward, support that meets the specific needs of your child.”

The Children’s Hospital of Georgia has one of the area’s largest child and adolescent psychiatry and psychology programs, with specialists who can help your child with the anxiety and depression that can accompany bullying. For an appointment, call 706-721-9331.

There has been a problem with your Instagram Feed.