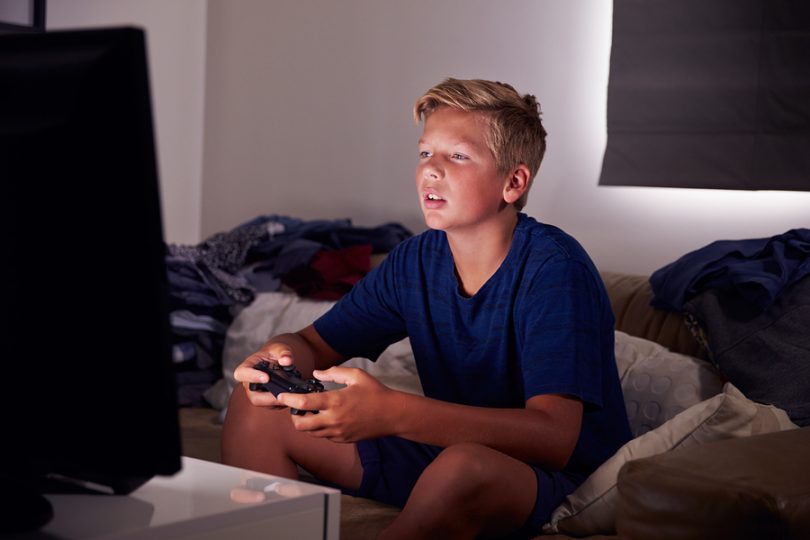 You recognize the symptoms: the glazed eyes, the crouched-over position, the lack of response—even if you shout or wave a hand in front of your child’s face.

The latest data says that about 91 percent of kids play video games. But ready to be shocked? In a typical day, it’s estimated that kids and teens spend more than six hours in front of a screen—which includes TV, gaming, cell phone use and more.

“That’s too much,” said Dr. Dale Peeples, a child and adolescent psychologist at the Children’s Hospital of Georgia. “As a general rule of thumb, we advise parents of older kids and teens to keep screen time under four hours, which should include time spent doing schoolwork. For toddlers and preschoolers, a half-hour to an hour is better.”

What’s the harm? So much time spent gaming is time not spent enjoying physical activity, reading, music—all of which have positive benefits. All that time could also be eating into time for homework, chores and other responsibilities too.

But the main concern is the growing rate of internet gaming disorder—also known as video game addiction—which the American Psychiatric Association has identified as a diagnosis that warrants further attention. “It’s generally accepted that this is something that we need to look into and treat, in both adults and kids,” said Peeples.

Does your child love video games too much?

Of course, video games in and of themselves aren’t bad. But do you know the signs that they’re causing a problem for your child?

There are several questions parents can ask, said Peeples:

If the answers are mostly yes, then it may be time for some more structure around gaming. Cold turkey isn’t typically the best way to go for any addiction, so start by slowly managing your child’s expectations around gaming.

As a first step, if the gaming system is in the bedroom, move it out so that your child isn’t tempted to stay up all night gaming or playing when homework is supposed to be happening.

Next, disrupt their usual pattern. Is your kid used to coming home after school and playing video games until dinner? Look for other activities or social groups your child will enjoy and can get plugged into, whether that’s clubs at school, youth groups, Scouts or more. “Anything where they are around peers and can socialize can help substitute for the games, which kids often turn to for the social experience,” said Peeples. “Encourage a balanced lifestyle too, including sports or physical activity.”

Then, set some clear rules and expectations for how much time your child can game, aiming for four hours or less depending on the age of the child (and remember that four hours is a max time that should include any time on the computer for homework).

It’s always a good idea also to read game ratings and only buy or borrow games that are age appropriate. And whether or not you’re into gaming yourself, try to be involved and do gaming as a family activity—or at least sit down with your child and watch and ask questions.

Be prepared, though, for kids and teens to push back, especially if your child has been showing the signs of game addiction for a while. Still, it’s worth it to make these changes now: “If we don’t teach our kids good boundaries now, from my clinical experience, these kinds of problems become even worse in young adulthood—say, when they’re in college and no one is there to set limits for them,” said Peeples. “That’s when we see kids really melt down.”

It’s also worthwhile to consider why your child has immersed himself or herself in gaming. Surveys of individuals with gaming disorder have often found limited family support and conflict at home. “Reducing conflict and improving communication can be very helpful,” said Peeples.

If you happen to be a big gamer too, that can be great, said Peeples, since you and your child can play together. But be cautious if there might be a chance that you yourself might have a problem with gaming: “It becomes more of a challenge to set boundaries with kids when they see you doing one thing and you’re expecting them to do another,” he said. “There are also higher rates of depression and anxiety associated with gaming disorder, which can make the job of parenting that much more difficult. So if you think you have the warning signs of a bigger problem, get help to address it.”

Because although video game addiction might be a relatively new phenomenon when it comes to being an official diagnosis, the signs and symptoms have been with us for a while. “It’s definitely something we should take seriously,” said Peeples. “There are a lot of good interventions that can be done at home, but as parents, this is a truth we all know: It’s a lot easier to put rules and expectations in place before there’s a problem than after there’s a problem.”

Time for a Check-up?
Children’s Hospital of Georgia is the only hospital in the area completely dedicated to the care and well-being of children. We ensure that your child gets the attention he or she deserves in order to receive a proper diagnosis. For more information or to make an appointment, visit augustahealth.org/chog or call 706-721-KIDS (5437).